The influx of children into the US has been compared to the "Katrina" of immigration. 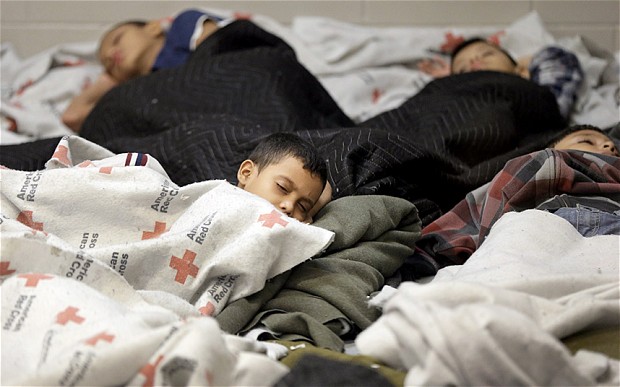 Illegal Children Immigrants sleep in the cramped quarters of the temporary housing set up by the Obama Administration. Photo from telegraph.co.uk

Every day since about 2011, thousands of children flood the border states of the Unites States, the majority from Central America. Not only are these children illegally crossing the border, but they are doing so unaccompanied, many toddlers that are traveling with older siblings. This poses the question, what is the US supposed to do with them now that they are here? This question is causing lawmakers and government officials to rear up and take a stand over controversial immigration policies.

Without current tighter immigration policies, about 47,000 children have crossed the border at this point of the year, and the count is expected to be at 90,000 by the end of 2014. As it has already been stated, a majority of these children are making a risky journey from Central America. In actuality, 28% are Honduran, 25% are Mexican, 24% are Guatemalan, and 21% are El Salvadoran.

These children are forced to attempt this dangerous migration due to the break out of Civil and other wars in their countries and also due to the simple rise of violence in their neighborhoods. To put it into perspective, Honduras is currently ranked number one for the most murders in the world, and El Salvador and Guatemala are fourth and fifth, respectively. This violence has, in fact, become so bad that the requests for political asylum from people living in El Salvador, Honduras, and Guatemala have skyrocketed 712 percent.

This mass immigration is also due to the DREAM Act (Development, Relief, and Education for Alien Minors Act), passed by President Obama. The main premise of this act is that if a child arrives illegally in the United Stated while still young, once they grow into functioning adults, they will not be deported. Obviously, this causes a large draw of parents wanting their children to have a better life.

As these children keep arriving, the government is in a situation where no matter how fast they bail out the boat, the boat is still sinking. The Obama Administration has posed a temporary solution of setting up housing near the borders for these unaccompanied children (a.k.a. UACs). However, many of these houses are becoming overwrought with disease, and children are still immigrating at a rate that is too fast for the temporary housing to hold them while the government processes the aid and asylum requests.

Because of the impending doom of the current solution, lawmakers and high standing political figures are beginning to voice their opinions. Hillary Clinton proposes that we simply deport them, in essence ending the US Asylum program. Clinton continues to state that, “We have to send a clear message: just because your child gets across the border doesn’t mean your child gets to stay.” Also, the Homeland Security Secretary, Jeh Johnson, is currently circulating multi-language op-eds that state that children are not simply given a “permiso” once they have crossed the border, but instead, they will be given a stern deportation hearing notice and told to appear in front of a judge. However, more conflict arises here as Federal law prohibits money to be granted to people undergoing immigration proceedings. Thus, these children are virtually given no chance as they cannot afford representation and cannot present the facts on their own. Of course, the only other option is to issue them visas; however, issues arise here as to the fact that there is currently an extremely long waiting list to obtain a US visa.

Thus, in the following years, the US is sure to see much internal conflict, coupled with drastically increasing immigration policies.

The Wrangler • Copyright 2022 • FLEX WordPress Theme by SNO • Log in