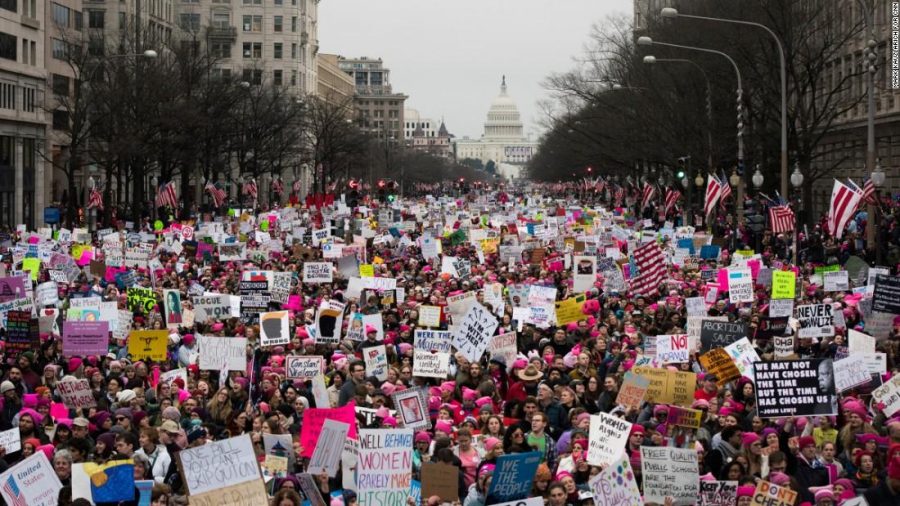 The Women’s March attracted thousands of people, not just women, to march for their rights.

Are We Moving Backwards?

We marched for our rights, the same rights that are in the process of being taken away no less than a day later. 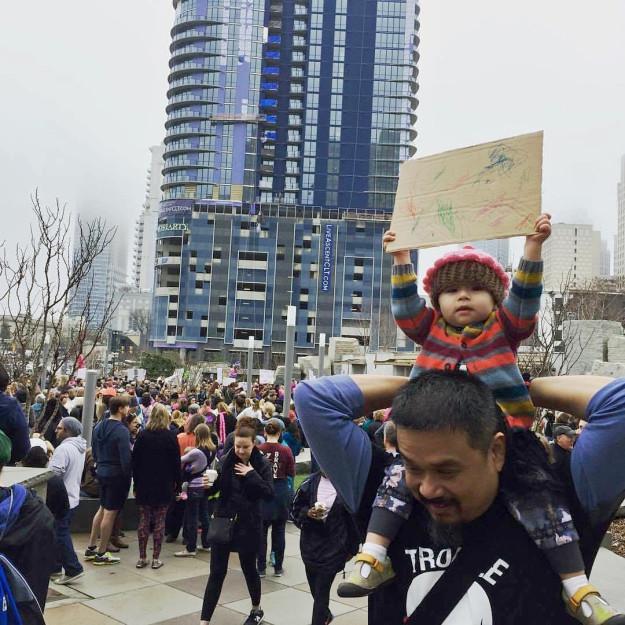 January 21st, 2017 officially marks a historic date in the history of the United States and the rest of world. More than 2 million people around the world peacefully marched through cities, like Washington, New York, Boston, Atlanta, Denver, Los Angeles, Phoenix, St. Paul, and Key West, protesting for equal rights of women, minorities, immigrants, the LGBTQ+ community, and action on climate change. It may just be the largest protest in all of US history. And the world support that it attracted made the cause so much more successful. They were also protesting one now important figure in history: America’s 45th President, Donald Trump.

The Women’s March is an important cultural movement, especially in our society, where people of all genders, groups, and communities are still having to fight for equal rights. If you were wondering why they marched, it was because of the rights that are quickly being stripped away from not only people in the United States, but across all seven continents. They marched for the right to their own bodies and not having someone forcing a decision for them.

Many people fear that with President Trump in office, there would be more rights taken away like the cutting of funding for Planned Parenthood, repealing Obergefell v. Hodges and Roe v. Wade by Trump’s new Supreme Court nominee, and the reinstatement of the Global Gag Rule.

And Trump has already started doing some of those things.

The Global Gag Rule was established in 1984 by Reagan and it bans foreign nongovernmental organizations that receive certain kinds of American aid from counseling health clients about abortion or advocating for abortion law liberalization. Just yesterday, President Trump reinstated the Global Gag Rule, following the footsteps of former Presidents Ronald Reagan and George W. Bush. Bill Clinton and Barack Obama rescinded it. Every republican president reinstates it, while every democrat president rescinds it. There’s major controversy surrounding it between the political parties and it is why the Global Gag Rule usually does not stay permanently established.

Trump has also revised the rule so that it expands the policy to all global health funding and it will impact $9.5 billion in foreign aid instead of $600 million. Many organizations that work on AIDS, malaria, or maternal and infant will have to make sure that none of their programs involves any referrals of abortion.

Geeta Rao Gupta, a senior fellow at the United Nations Foundation gives the example of HIV/AIDS clinics that get U.S. funding to provide antiretrovirals: “If they’re giving advice to women on what to do if they’re pregnant and HIV positive, giving them all the options that exist, they cannot now receive money from the U.S.”

For years, there has been a fight against diseases and unsafe abortions, and the progress is being reversed, something that will have very negative outcomes for the present and the future. Establishing this newer version essentially means that the progress we have made in fighting HIV/AIDS, death in childbirth, and other health issues will all be lost.

Nancy Northup president and CEO of the Center for Reproductive Rights stated that this rule will lead to “increases in unintended pregnancies, unsafe abortions, maternal and newborn deaths. This harmful policy undermines American democratic values of free speech and imposes an anti-woman agenda.”

There is also a fear that Roe v. Wade will be overturned, the court case that legalized abortions. This may be unlikely, but it is highly possible that Planned Parenthood will be defunded and there will be strong restrictions on abortions. And with a promised repeal of Affordable Care Act, women will not be able to access birth control.

This is another step backwards for women across the nation because they had to right to choose what they wanted to do, but now, they will be denied reproductive health services such as screenings for breast, ovarian, or cervical cancer, and screenings for sexually transmitted diseases. They will also not be allowed access to contraceptives, which has numerous benefits, not only preventing unplanned pregnancies, but also helping with controlling hormones, acne, reducing the risk of ovarian cancer, and lowering risks of endometrial cancer, pelvic inflammatory disease, and polycystic ovarian syndrome.

The Wrangler • Copyright 2022 • FLEX WordPress Theme by SNO • Log in