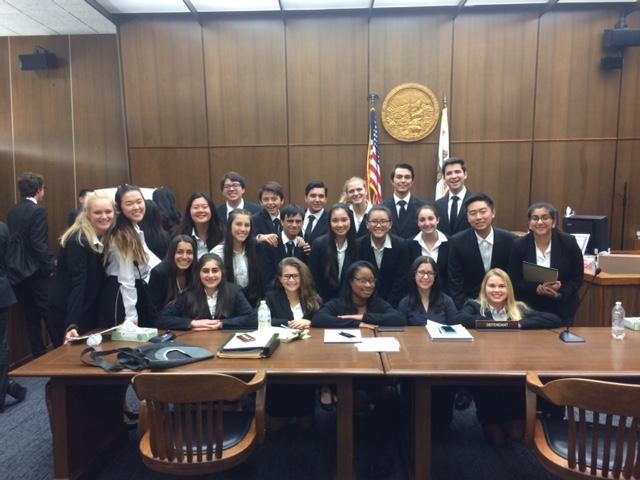 Over the years, Yorba Linda High School has offered many incredible academic programs. Recently a new program has been added to our school— mock trial. Mock trial was first introduced three years ago to YLHS, and ever since then, a lot of students have participated in this program. It is an after school class that requires around 10 hours of practice each week. It is also a graded class that is based on participation.

In this course, students can learn how to improve their speaking skills as well as develop quick, on-the-spot rebuttals like real lawyers do in court. Through this program, a student can experience what it is like to be in an actual courthouse and speak in front of an actual judge.

There are many different ways to participate; students can choose to be an attorney, witness, bailiff, or clerk. Each year, there is a different case to discuss. For example, this year, the case deals with accusations of human trafficking and false imprisonment, where the defense team argues for the defendant to not be guilty while the prosecution team argues for the defendant to be put in jail.

After a couple of months of intense practice, YLHS’s mock trial team goes to the Orange County Superior Court-Central Justice Center to compete against other school in the county. In the first two years, this school’s team has made it to the playoffs, but unfortunately they lost during the first round both times. This year, the team is stronger than ever, and Yorba Linda hopes to make it in the playoffs again, and make it even further in the competition.

This year, Mrs. Toxqui is the only teacher coach that runs the program. The team also receives assistance from attorney coaches. Shyneisha Rous’e is currently the attorney coach at YL, and she shares her experiences working as a lawyer in day to day life. She helps students understand how real trials work and courtroom etiquettes.

Brianne Han (10) is in her first of mock trial, and she is currently playing the role of the victim. “It’s really fun being able to portray a character totally different from my own personality,” she says. “It’s almost like acting, but it incorporates many real world aspects that I think will benefit me in the future.”

Mrs. Toxqui encourages all students to join. “Students should join mock trial because it is challenging, exciting, and fun,” she says. “They have a chance to make friends, learn about the legal system. and compete in a real courtroom. I can’t think of a better high school experience for any student.” Next year, the year of 2018, the team will do even better with more members, so join mock trial! Everyone is welcome.