The Catastrophe of the Great Barrier Reef 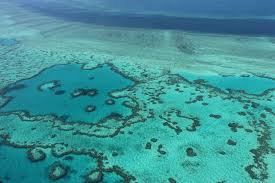 Above is not even a quarter of the reef in which has already become extinct. Immediate action is necessary in order to protect this natural masterpiece.

The largest living structure in the world, the Great Barrier Reef, is in desperate need of help due to the fact that all 2,300 kilometers of beauty is in danger of going extinct due to coral bleaching. Stretching from the tip of Queensland, Australia, to northeastern Australia, it is to this date the largest coral reef system on our planet. Due to massive coral bleaching, more than half of the reef’s coral have been pronounced extinct.

Coral bleaching occurs when warm weather shines down on the coral for long periods of time. Although bleaching is one factor in the death of the reef, according to the Guardian News, climate change has also played a big factor in the destruction of this beautiful body of water. Home to seventy indigenous groups of mammals and organisms, the possibility of more areas of the reef becoming extinct will ultimately give those creatures no shelter and no food to live of off. However, according to many scientists across the globe, many are saying it may be too late to save it.

In addition to natural causes, human carelessness also plays a prominent role in the destruction of the reef. Pollution, global warming, and oil spills throughout the world have contributed to the bleaching of the coral and the extinction of many of the prominent groups of organisms that occupy the reef. Vivian Boukhalil (10) stated, “It’s a tragedy that this aquatic masterpiece has gone extinct due to humans’ carelessness.” According to the Guardian News, more than 81 percent of the reef is severely bleached and more polluted than it has ever been before. They later went on to state that the cause is mainly due to global warming.

A lack of understanding of the atrocities that is occurring is due to the fact that visitors of the reef only explore the midsection of Australia’s natural masterpiece. This part is in splendid condition and as of yet has no signs of bleaching or dying coral. The real problem, however, is in the parts in northern Australia. More than six billion dollars is contributed to the Australian government from tourists; therefore, the death of the reef will have a detrimental impact on the economy of Australia.

Strong and immediate action is necessary in order to preserve the other half of beauty that this reef possesses. With the removal of fossil fuels burning into the ocean and oil being used efficiently, the Great Barrier Reef just might have a chance of surviving and preserving its natural beauty.