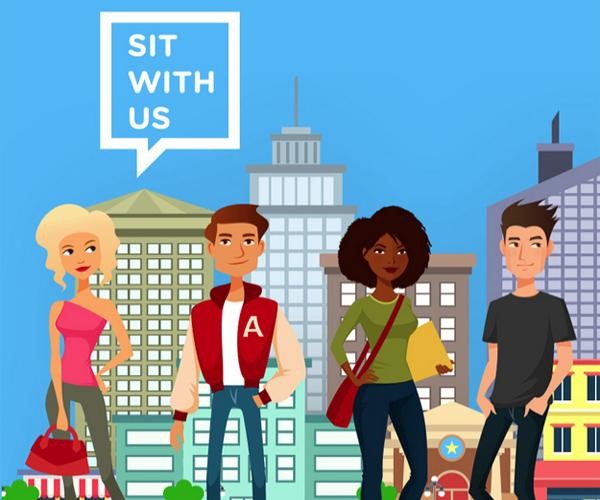 Above is the cover of the app called "Sit With Us' The app is available on all Android and iPhone Products.

Recently, Natalie Hampton, now a 16-year-old living in Sherman Oaks California, developed a new and improved way to find friends to sit with at lunch. “Sit with us” is what she calls the app, and it helps students who have difficulty finding a place to sit at lunch, locate an awaiting table of friends to sit with. The app allows students to designate themselves as “ambassadors,” according to the Huffing post; their main job is to invite others to join them during lunch. Ambassadors can then post “open lunch” events, this action allows for users of the app to locate ambassadors tables. Hampton is the main designer of Sit With Us. The new app originally launched on September 9, 2016. In an interview with LA daily news, Hampton stated she was inspired to create it after she “ate alone during her entire seventh grade year.” Past experiences and lonely situations left her feeling vulnerable and made her a prime victim in the act of bullying. Now a junior In High school, she is attending a different school and is socially successful. However, all those years of being isolated and alone has allowed for the production of this app.

According to Hampton, there are many reasons why the app was published; the most impactful one is the reason that it prevents kids from being publicly rejected and being considered social outcasts by their peers. In an interview with Npr.org, she explained “When students, especially the more popular ones, stand up to bullying, it has a significant impact on kids all around.” Rutgers, Yale, Princeton, and many other schools played an important role in conducting experiments to prove this theory.

During the 2012-2013 school year, more than fifty schools around the country allowed their most socially connected students with technology to improve bullying. According to the Huffington Post, more than thirty percent of the students used the technology in a positive manner.

The switch from the old school way of just asking someone to sit down to the technology was a struggle in itself. Like Hampton and many others, asking a stranger if you can sit with them can socially label you as an outcast or a loner.