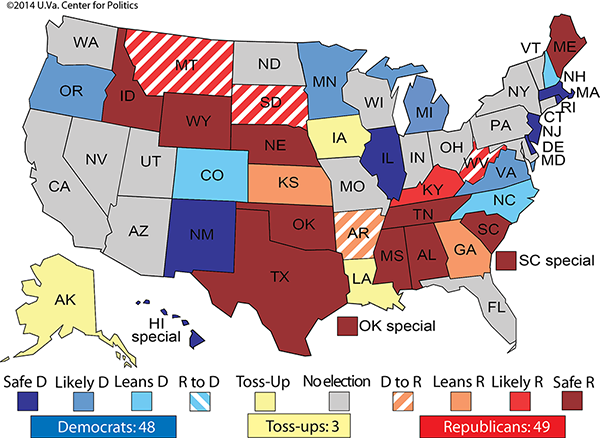 Only three senate races are still toss ups, however some like Colorado, North Carolina, and Arkansas are still in play

Labor day just passed so that means two things: you can’t wear white anymore and it’s time for election season. For politicians, every season is election season. But for the political laymen, these next few weeks will be full of political ads interrupting Honey Boo-Boo and campaign flyers littering everyone’s doorsteps.  Since this is a midterm election, there is no president to be elected on November fourth, but there is still much to be decided at the federal elections this year. The Republican party is currently in control of the House of Representatives (234-199) and most, including the Center for Politics at the University of Virginia, expect the Republicans to retain or even expand their lead in the House by up to eight seats. It consequently seems as if all eyes are on the Senate this November.

Because congress is so divided (i.e. GOP House and Dem Senate) many think that if Republicans win the Senate in November much of the gridlock will stop. However, this is false hope. There is no way President Obama will go along with a Republican Congress’s agenda. So really, no matter what happens, there really won’t be much of a change in Washington. But it’s still fun to watch all the politicians fight it out.

Currently, the Senate is comprised of 53 Democrats, 45 Republicans, and 2 Independents who caucus with (which essentially just means votes with)  the Democrats. This year there are 21 Democratic seats up for election and 15 Republican seats. The GOP needs to net +6 seats this year to get a majority. To keep their majority, Dems simply can’t lose 6 seats–at this point, however, Democrats aren’t doing a very good job of that. Larry Sabato, the director of the University of Virginia’s Center for Politics, predicts in his blog, Sabato’s Crystal Ball, that out of the 36 Senate seats up for election, 4 of the Democratic seats are basically assured to go Republican (Montana, South Dakota, Arkansas, and West Virginia). According to this, only 4 seats are still “Toss Ups” at this point: Louisiana, North Carolina, Alaska, and Iowa. And Republicans need just two of these four toss-up seats to get a majority in the Senate.

What are the chances of a Republican led Senate? Actually, it’s more likely than not that the GOP will be the big winner this November for lots of reasons. To begin, senators are only elected every six years; thus, the last time that these Democratic senators were challenged was in 2008, which was when President Obama was first elected and many Dems in red states rode on Obama’s coattails to Capitol Hill. This year, however, the political climate is much different. According to Real Clear Politics, President Obama’s poll numbers are hovering around 40% and the Affordable Care Act, the Democrats’ signature piece of legislation under President Obama, is widely unpopular. Many Democrats are in danger of not winning a re-election because they voted for Obamacare and supported the President’s policies whilst representing Republican states. Therefore, the political pendulum will swing from Democrat to Republican. It would be more surprising if this didn’t happen than if it did. The Republicans seem to have a clear path to victory, but is anything in politics this clear cut? During the 2012 election, there were similar circumstances, but on November 6th, 2012 Republicans ended up losing 2 seats. Obviously, the only poll that counts are the polls on election day.
Before the 2012 election, statistician Nate Silver accurately predicted who would win each state in the Presidential election, incorporating polls into an algorithm he had created. Now he is predicting the Senate election and updates his predictions daily. As of now, Republicans have about a 58% chance of winning the Senate. But anything can happen between now and November; nothing in politics is certain.