Embarrassing Moments Everyone can Relate 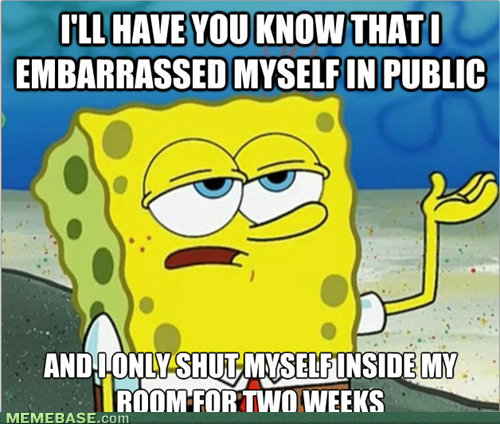 Dealing with an embarrassing situation? Regretting something that had happened? Feel like taking a run for it? Here are several awkward circumstances that every student encountered at least once.

“What was that?” – It’s been a long tiring day, and one can’t help feeling tired and sleepy during class. Yet, teachers seem to have a tendency to call on their most unexpecting victims. Sleep ceases to exist as the clueless student thinks desperately for what the teacher might have asked. However, everyone knows that the ending to this story is a terrible fail. Athena Kieu(10) recalls being “in math class when [she] was falling asleep. There was this one question, and the teacher randomly called [her] for the answer. [She] replied by saying that [she] didn’t know. The question was asking what the variable to the problem was?”

“The awkward wave”- A situation that one might recall as being embarrassing, and unforgettable. Waving to friend is always great; however, when that “friend” isn’t the right person then it becomes really awkward. The friendly energetic wave becomes a halfway jerk as one realizes that they probably look like a lunatic.

“Oops! Wrong Class!” -Ever walked into the wrong classroom? Finding classes can be hard and confusing, but when one stumbles into the wrong class now that’s an unfortunate encounter. A class of thirty students, and thirty pairs of eyes are watching that one lost student who also notices that this isn’t where she belongs.

“Hey there!” – It seems that every unfortunate encounter seems to unfold in front of either his or her crush or a huge crowd of people. Tripping and falling, everyone has done it, whether it is over someone’s leg or nothing at all. The few seconds in which one is falling seems to slow down. Amina Abdelbary (10) was “in theater class, when [she] was going  down the stairs, fell off the stage and sprained [her] ankle.”

Finally, here is one more awkward situation told by Rebecca Juarez(10). Physical Education, a period in which students learn to play and enjoy multiple sports, has became a setting of a very unfortunate experience. “[Rebecca] was playing capture the flag in P.E . [She] tried to pull a flag from a boy on the opponent team, but instead [she] pulled his pants down. To make matters worse, a girl that followed squeezed his butt in a failed attempt to also pull the flag down.”

Although every embarrassing moment may feel like the end of the world, it is going to be okay. Everyone has them, and it’s only for the moment.