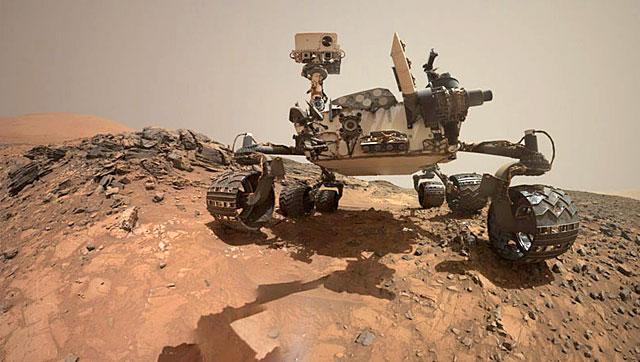 Here is an image of the Curiosity Rover

Since 2014 the Curiosity Rover has been gathering information on the planet Mars. Once the journey to Mars was complete, the rover has been vicariously gathering different artifacts and rock formations that will help us determine if life on mars is possible. After traveling more than five miles, the rover has finally gotten to its destination. NASA has recently released new color images taken by the Curiosity Mars rover, which it says will help increase understanding of the red planet’s landscape. The pictures, were taken in the “Murray Buttes” region of lower Mount Sharp, an 18,000ft mountain, where the Rover has been based since 2014.

Scientists chose Mount Sharp as the rover’s destination long before the roving lab launched from Cape Canaveral in November 2011 and touched down in August 2012.

The mountain’s layers are essential for different chapters in the environmental evolution of Mars. Curiosity is looking into how and when habitable conditions on Mars could hold human beings on the planet.

Curiosity Project scientist Ashwin Vasavada said the team was “thrilled” to undertake the expedition, describing the landscape as “a bit of American desert Southwest on Mars”.

The striking formations that the rover picked up are the remnants of ancient sandstone which were formed when winds deposited sand on the lower regions of the mountain. Since the recent discovery, the Curiosity team has planned  to create several mosaics from the images, with NASA saying they compare to photos taken in America’s national parks.

Living up to its name, Curiosity roamed the crater floor as it’s made its way to Mount Sharp. It’s already solved its primary mission objective, which is to determine whether the Martian environment could have been habitable to microorganisms. That answer is yes. NASA says the rover has found evidence on Gale’s crater floor that a lake bed existed billions of years ago. Moreover, the lake bed offered fresh water, key ingredients for life and a source of energy for microbes.

However, like all missions there are many struggles and predicaments. Recent struggles include the durability of the wheels. The planet’s surface has forced NASA to bring the rover back to earth due to the wheel damage done by spikes in the ground. Conversely, a recent release by NASA has stated there will be a new launching of the rover in 2020 which will be updated in which enabling the rover to hear the planet. Cole Smith (10) stated “ Life on Mars can exist. If a certain species can live on earth, then a certain species can live on Mars”. The research of Mars is far from over, however every day scientists are getting closer to discovering if life on mars can indeed exist.