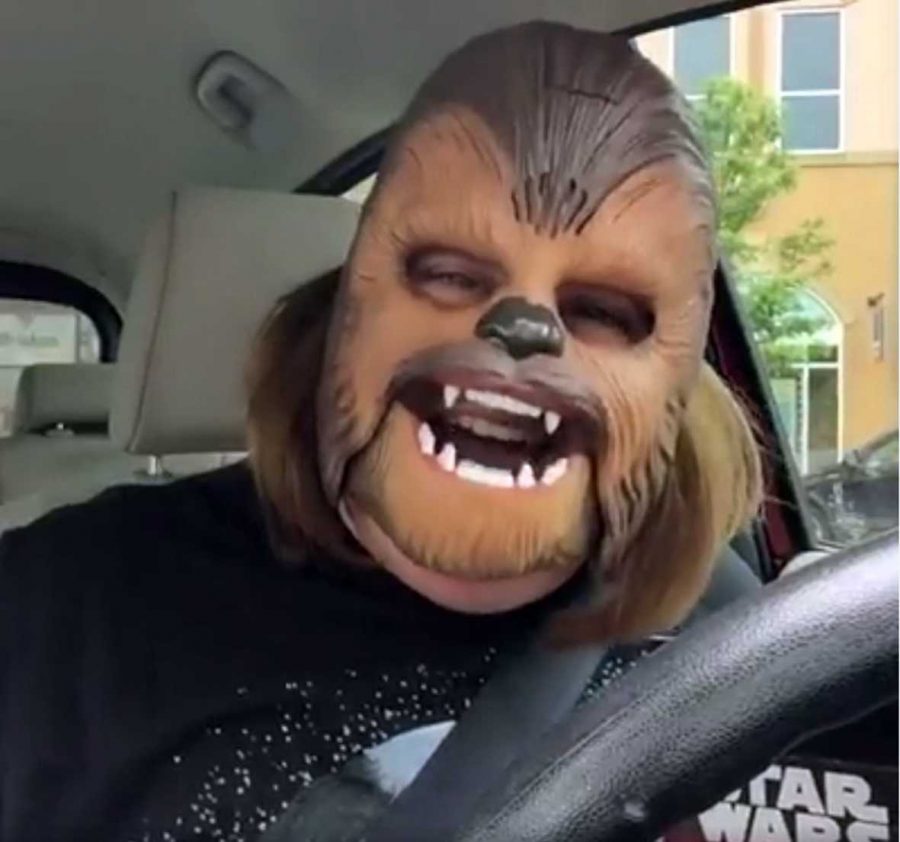 “Oh, I’m such a happy Chewbacca!” This line from the 3 minute video posted by Candace Payne on her Facebook page on May 20 has since captured the hearts of over 136.5 million people who viewed it, and the 3.2 million people who shared the video. If you haven’t seen the video already, click here to check it out! In the video, Payne shares with her friends the joy of trying on a new Chewbacca mask she had just picked up from Kohl’s; however, it’s her contagious laughter that truly kept those viewers talking. In fact, Payne’s video now stands as the third most viewed Facebook video, only behind Gangnam Style and the sneezing baby panda. Her video was never meant to be an internet sensation, but with her uncontrollable laughter, the joy simply couldn’t be contained and went viral. Corbin Thaete (9) explained his own love for the video, saying, “Her excitement over such small things in life just overjoys me.” And it looks like everyone else has the same idea too, for the video has sparked a large chain reaction.

Starting off, Kohl’s, which sold Payne the “Star Wars: Episode VII The Force Awakens Chewbacca Electronic Mask” featured in the video, has seen an increase in overall sales from the viral video. According to MarketWatch, Kohl’s had experienced an “87% drop in profit in the first quarter of 2016.” While executives had seen it as nearly impossible to recover from the downfall, Payne’s video single-handedly saved Kohl’s. Her video helped remind people of Kohl’s unique qualities and convenience, sending people rushing to Kohl’s for the Chewbacca mask and many other goods. Being that Kohl’s was not involved in the making of Payne’s video, it is without a doubt that Kohl’s has truly struck gold with the viral video. How much did this advertising cost for Kohl’s? Well, to thank Payne, Kohl’s representatives gifted her $2,500 in Kohl’s gift cards, 10,000 reward points, and lots of Star Wars toys — more Chewbacca masks too!

Kohl’s isn’t the only one to profit from her video, however. Payne’s video also brought to light a new trend for “haul videos.” While “haul videos” are usually made and posted on YouTube to feature many items purchased, Payne uploaded her video on Facebook and only featured one item. Thus, Payne’s success is truly unlike anything ever before seen, and has changed the “haul” industry.
In an effort to capture and continue to spread the excitement Payne puts forth, other individuals have tried the masks, including celebrities. James Corden, host of “The Late Late Show,” had Payne on as a guest of his show and filmed one of his popular “Carpool Karaoke” videos with her and JJ Abrams. Payne has also been invited on as a guest for “Good Morning America.” In the next few weeks, there will definitely be more videos of people wearing those masks and features of Candace Payne.