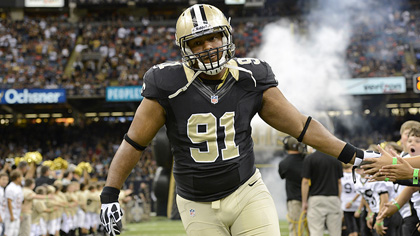 (Photo Courtesy of US Magazine)

This past weekend, on Saturday, April 9th, former New Orleans Saints defensive end star Will Smith died from fatal gunshot wounds. According to the police, a man was killed and a woman was wounded in a New Orleans double shooting on Saturday night. The man was later identified by witnesses and law enforcement sources as Will Smith.

The female victims, Smith’s wife Racquel, sustained gunshot wounds to the leg and was taken to the hospital. According to the police reports, the authorities say that Smith was involved in a three car collision and was shot multiple times in an ensuing altercation. One of the drivers was taken into custody and questioned by the police. Will Smith was pronounced dead on the same.

The alleged shooter is 28 year old Cardell Hayes, who waited for police to arrive after the shooting and was arrested on a charge of second degree murder. It has been said that Hayes had no prior relations with Smith. There is now an ongoing investigation into the motive behind the shootings and Smith’s death. Hayes has a previous criminal conviction, according to New Orleans Parish Criminal Court online records. He pleaded guilty in 2014 to the illegal carrying of a weapon and possession of drug paraphernalia, both related to a 2010 arrest.

Smith had dined on Saturday night with William Ceravolo, one of the police officers named in a federal lawsuit in 2005 by a man with the same name as Hayes, who sued the city of New Orleans over the police shooting of his mentally ill father and who eventually won a settlement six years later. Whether or not this was a factor in the shooting is unclear.

Smith was traveling in a Mercedes in the city’s Lower Garden District shortly before 11:30 P.M. CDT on Saturday when his car was rear ended by a Hummer. Smith, 34, exchanged words with the driver of the Hummer, who took our a handgun and shot him three times and his wife twice in the leg (Sports Illustrated).

The Saints and the NFL community expressed the shock and deep sorrow they feel towards this unexpected death. The Saints also announced that Smith had been inducted into the franchise hall of fame, which was not supposed to be announced until May. Smith last played in 2012 with the Saints, recording 33 total tackles in 16 games with six sacks. A first-round pick in 2004 out of Ohio State University, Smith spent his entire 10-year career in New Orleans and played a prominent role in the Saints’ 2010 Super Bowl victory. Nathan Duong (10) said, “I couldn’t believe this when I heard about it. I watched him play, and it is such a tragedy when someone so young and undeserving suddenly passes away.” Smith will always be remembered for his talents and performance as a prolific NFL star, and we all express our condolences for his family.