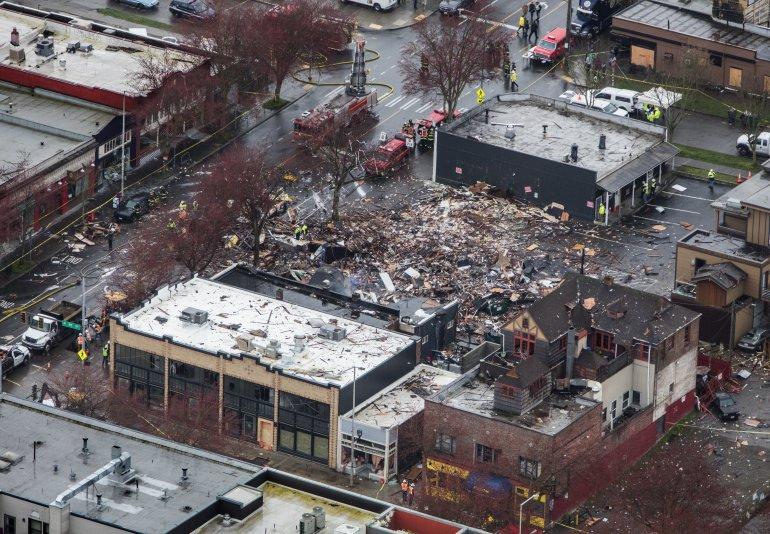 On Wednesday March 9, a horrific explosion erupted the town of Greenwood around 5:47 p.m. causing a building to be obliterated, and eight firefighters to be sent to the hospital. Some investigators are still speculating the cause of the explosion, surrounding civilians now are a big help to the investigating team. The cause of a massive explosion that ripped through Greenwood, Seattle was reportedly caused by a gas leak in which firefighters responded to fix before the blast. Obliterating at least one building, damaging many others, and sending nine firefighters to the hospital, the now known blast was the talk of the town and the center of all conversation.

Seattle Mayor Ed Murray called the blast a “devastating disaster” for the business district, and a loss to the city. Battalion chief and eight firefighters were transported to Harborview Medical Center after the incident, said Seattle fire spokeswoman Corey Orvold. These eight men and one woman all had been released as of 8 a.m. (11 a.m. ET), according to the hospital. “Thank God, no one was seriously injured, and hopefully, at least as far as we can tell, no one was killed here,” Murray said Wednesday afternoon.The fire was officially extinguished around 10:30 a.m., according to the Seattle Fire Department, leaving a lot of charred rubble behind.Approximately three hours before the explosion occurred, city workers were at the site fixing and powering down gas lines all throughout the town. The long drilling process that took place took about six hours for firefighters to spot and stop the leak. Firefighters had to put water on the fire from the edge of the rubble left by the explosion. Due to the cause of still-leaking gas, they couldn’t go into the area where the explosion had occurred. Investigators are still trying to pinpoint the source of the leak.

Now, as you can tell, being a firefighter isn’t all that glamorous after all, in fact, the firefighters on scene described the task of stopping a gas leak one of the most dangerous task’s a firefighter has to deal with. Fire Chief Harold Scoggins said in an interview, “We know, as firefighters, that this is a very dangerous job, and these things can happen from time to time,” “… They did all the things they needed to do to take care of business.”  According to Cnn.com. The act of heroism that those eight firefighters showed on the scene that day goes to show how great our American firefighters are and how hard they work.

The civilians in which surrounded the area were frightened out of their minds when the loud boom erupted. One civilian, a journalist named Brian Hayward described the scene in a whole new way, “I took off running but when I turned back around, there was debris just coming down from the sky. … I remember … a giant fireball going up into the air.” This now gives the investigation into the fire, a head start into really discovering what caused the commotion of the Wednesday afternoon.  Although this tragedy does not obtain to Ylhs in anyway, I talked to Michael Gutierrez (9) in which he described the moment in which he heard about the tragedy, “When I heard about the news, I was scared to think something like that can happen here.” This horrific accident goes to show how anything can happen and how we as a nation need to be ready to stand up and show our true colors.