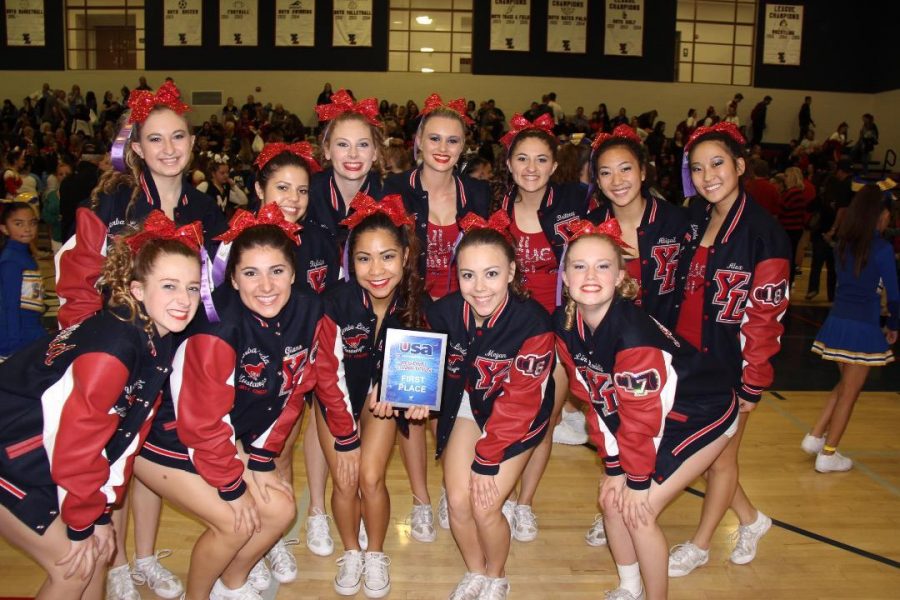 We are used to seeing these ladies on the sidelines cheering at football games, basketball games, and performing at rallies, so it was delightful to praise their hard work by cheering for them at their competition on Saturday January 16. The annual regionals are held here in our very own Yorba Linda High School gym. Being the qualifiers for nationals, many schools came to our school to compete. The tough competition ran all day from 11 to seven showing the true dedication of teams and fans alike as the bleachers were packed with spectators. The event was catered by many food trucks such as, fan favorite, mustache mikes. Led by senior captains Megan Gadbaw (12) and Kaila Labrador(12) the varsity cheer team placed first overall in the intermediate varsity show cheer division. Junior Varsity captains Claire Reddick (10)and Ruby Lockhart(10) also led their team to a first place victory. The Varsity song team led by captains Kaila Melanson (10) and Chloe Quast(10) placed second in the high school jazz competition and fifth in the varsity song/pom advanced category. Our junior varsity song team consisting of Isabel Esquivel (9), Macy Schreiber (9), Nicole Briscoe (9), and Tori Huhn (9) also competed in their own pom category.

The Varsity team’s competition routine consisted of the YLHS color shout, and a series of tumbling combinations. Endless hours of conditioning were visible in the balance that was kept by the flyers during the execution of arabesques and leg holds. Overall, their execution of all moves was controlled, strong, and confident delivering a clean performance that put them over the top. Other teams they competed against consisted of Whittier, Cypress, Schurr, California, and Amador Valley High School.The JV Cheer team also delivered a great performance deservant of their first place win.
Among many other teams the Varsity song girls stood out due to their lovely lavender jazz costumes and whimsical, yet strong routine. All eyes were on Julianna Saigusaa(9) during her quad leg hold turns, as well as other soloist Chloe Quast during her pirouettes. Furthermore, the music selection enforced the contrast in sharp and smooth movements in the choreography. The Song team is always seen as unbelievably talented, and their performance at the competition was no exception. Minutes after their jazz performance the small united team of five girls changed into their crimson, silver, and navy YLHS uniforms for their pom routine, in which they included a three person assisted backflip and a synchronized kick line. Lastly, the JV Freshman Song team experienced their first competition in the pom division. Tilts, turns, and needles, made the girls standout among many other teams.

Overall, the competition was energized and intense until the very last minute. Yorba Linda High School is extremely proud of all its talented students, their accomplishments during this event, and pays huge thanks to coaches Mrs. Shube and Sabrina Hinojos.