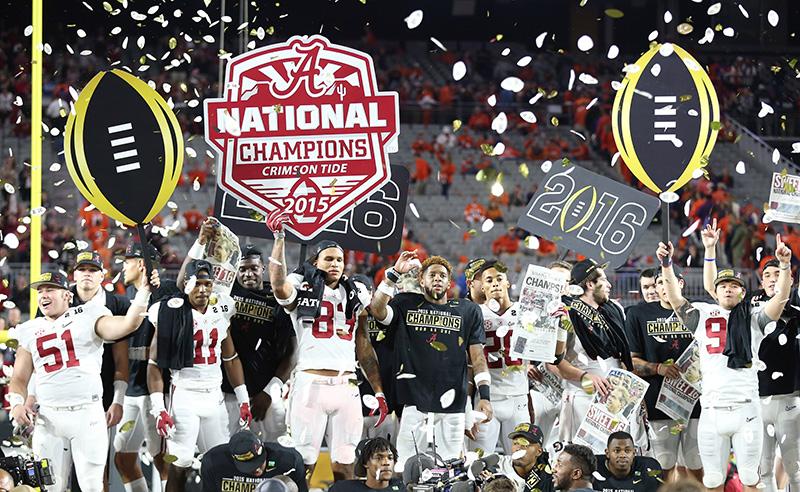 Coming into the game, the Tigers were heavily favored and predicted to win, as they had a record of 14-0. In comparison, Alabama lost to Ole Miss this season, and many people doubted whether or not they could win another national title. However, with Coach Nick Saban and offensive coordinator Lane Kiffin, the Crimson Tide pulled off the upset.

The majority of the game was a shootout – with both teams often scoring one after the other, and at halftime, the two teams were tied, 14-14. This game was a thriller in comparison to the two teams’ bowl games. On New Year’s Eve, Alabama blew out Michigan State 38-0 in the Sugar Bowl, and on January 3rd, Clemson defeated Ohio State 40-35 in the Orange Bowl. However, the BCS National Championship game left all fans avidly watching and standing on their feet with a wild 40 point fourth quarter.

At the start of the fourth quarter, Clemson lead 24-21; however, this lead would be short-lived. With 10:34 left in the fourth quarter and Alabama having just tied the game at 24-24, Saban took a gamble to try to keep the ball away from Watson, Clemson’s quarterback and the dynamic second runner up in the Heisman voting. He called for an onside kick, called a “pop kick,” from Adam Griffith, and Alabama defensive back Marlon Humphrey caught it over the shoulder at midfield. This immediately changed the dynamic of the game, as the tide turned in favor of Alabama.

Alabama would soon take a lead that they would maintain for the rest of the game, as quarterback Jake Coker hit tight end Howard for a 51-yard touchdown to take the lead, 31-24 with 9:45 left. Watson and Tigers then responded with a field goal, to cut the lead to 31-27. However, on the kickoff return, Crimson Tide running back and Heisman Trophy winner Drake Henry took the ball 95 yards into the end zone for his third touchdown of the game to make it 45-33 with 1:07 left. Although Clemson tried to respond with a late touchdown, they could not convert on an onside kick, and Alabama won, 45-40, ending Clemson’s quest to become the first FBS team to go 15-0.

Alabama’s victory marked Saban’s fifth national title – four in his nine seasons at Alabama – and leaves him only one short of Bryant for the most titles in history. The Crimson Tide became the second team in college football’s poll era, dating back to 1936, to win four titles in seven seasons. It is also the Tide’s 11th national title in the poll era – 10 AP and one coaches’ poll – and more than any other school (espn.com). Avid football fan Matt Bell (11) stated that “it was a great game to watch, and Alabama’s onside kick sealed the deal for their victory.”

Alabama’s legacy as a college football powerhouse will only continue to grow, as they are currently ranked number 1 in the final AP Poll of this year’s season. Football fans can only wait until next year to see which team will take home the national championship.