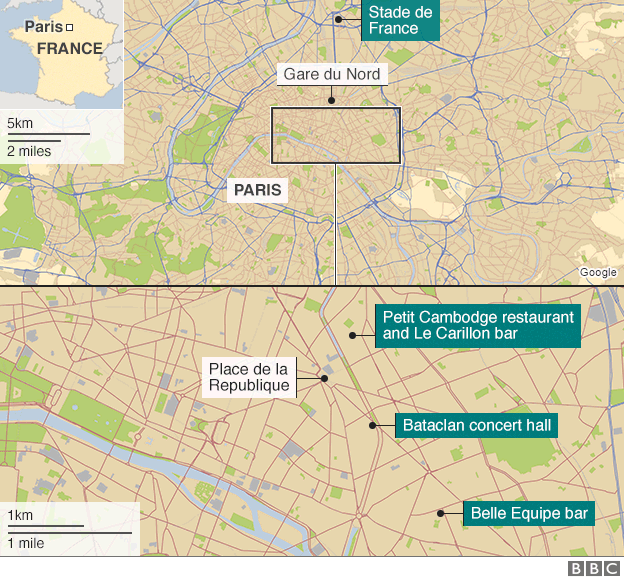 Map courtesy of the BBC

The Bataclan Concert Hall is by far the deadliest scene, where gunmen took more than 60 people hostage. The California rock group Eagles of Death Metal were playing at the time. The band has been accounted for since then. Concert-goers were not so lucky. Described as a scene of utter carnage, two gunmen shot people in cold blood, systematically, one by one. French police have now stormed the venue and killed two attackers. As many as 100 people were killed in this one attack, Agence France Presse reported.

An unknown number died in attacks near the Stade de France(where a soccer match against Germany was being played), with some reports suggesting a suicide blast.

Other attacks hit neighbouring Le Petit Cambodge and Le Carillon restaurants in the 10th district where a BBC reporter could see 10 people lying on the road, either dead or seriously injured.

French President Hollande, speaking on national TV, declared a state of emergency and closed all borders after the terrorist gunmen opened fire at multiple locations. Paris residents have been asked to stay indoors and military personnel have been deployed across the city. Much of the public transport, the subway system, has been shut down as the police have taken over the streets of Paris.

At least 100 people have died in Paris in this coordinated wave of gun and suicide bomb attacks. The situation is ongoing and the death toll is expected to rise, so more information should be forthcoming. Until then, our thoughts are with France.

And as President Obama so eloquently stated, “This is an attack not just on Paris, not just on the people on France, but an attack on all humanity and the universal values we share.”