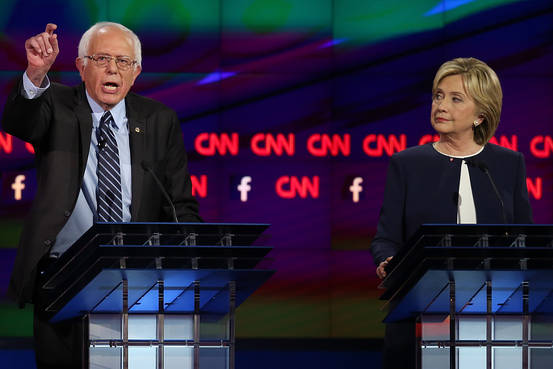 Bernie Sanders and Hillary Clinton at the Debate

On October 14, 2015 the Democratic debate took center stage. It’s telling that the Las Vegas crowd turned most of its attention to Sanders when he effectively defended his rival (Hillary Clinton) and he received his biggest ovation when he said he did not intend to criticize Clinton over the controversy from her decision to use a personal server for her email when she served as Secretary of State.

Hillary’s confident act on the stage of Las Vegas raises the question if Vice President Joe Biden will make a late presidential run. The race has been dominated by a perception that once again, Clinton is a leading candidate who, just as in 2008, is in danger of losing her status as a front-runner in the Democratic race for the ballot.

While using her home computer server for confidential resources, the idea of Clinton winning the presidential debate raised some red flags. She stated, “I’m motivated mainly by restoring the Clinton political machine.”

“The issue is not whether you get knocked down, it’s whether you get back up,” said Clinton, who also rejected the critique that her changing positions on the Trans Pacific Trade deal, the Keystone XL Pipeline and gay marriage meant she is just a hostage to shifting politic ways. In a way Hillary is swaying the Democratic race back and forth, with her detailed statements on gun acquisitions, climate change, Planned Parenthood, and most importantly she sated was job reform.

Cameron Carlson (9), stated “I did not watch the democratic debate, but by hearing about it on the news and by friends, I can not decide who I would want to be our president, a Republican or a Democrat.”

In figuring out who the Republican candidate will be and the Democratic candidate, people from all over the United States have mixed emotions on both sets of parties, including the front-runners in both parties.