Papal Visit To The States 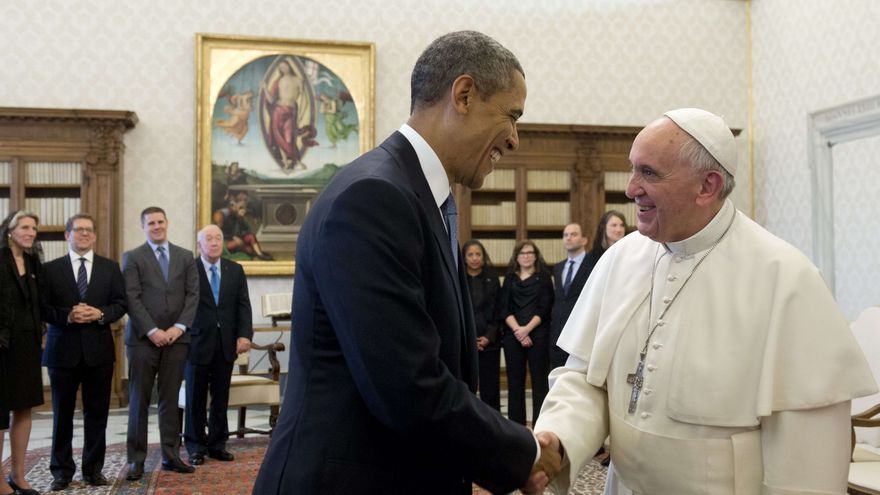 Pope Francis is greeted by President Obama in the White House

Since the birth of The United States of America in 1776, only 4 popes have visited. America most recently welcomed Pope Francis. Pope Francis went on a 5 day apostolic journey from September 22nd-27th visiting Washington DC, New York, and Philadelphia. To accommodate for the Pope, security was increased dramatically in all 3 cities he visited. Catholics around the country were very excited to have the Pope in town. Maddie Romano (11) expressed her excitement about the Pope for she said, “It was special that Pope Francis visited the United states because he rallied so many Americans together despite religions.”

Here is a recap of the Pope’s event filled trip to America:

Day 1: September 22nd- In the early afternoon, Pope Francis arrived at the Joint Base Andrews in Washington DC, from Cuba, to be greeted by President Obama.

Day 2: September 23rd- President Obama officially welcomed the Pope to the White House in the morning. At 11:00 a.m., Pope Francis began a papal parade around the National Mall. The parade was followed by a prayer, led by the Pope, at Saint Andrews Cathedral, with the United State bishops in attendance. In the early evening, a canonization Mass for Junipero Serra was held at the Basilica of the National Shrine of the Immaculate Conception. This was the first-ever canonization Mass to be held in the United States.

Day 3: September 24th- The Senate and Congress welcome Pope Francis in a joint session, which was televised. Around noon, the Pope paid a visit to St. Patrick and Catholic Charities of the Archdiocese of Washington. Around 4:00 p.m., Pope Francis departed Washington DC heading for New York. Upon his arrival, the Pope led an evening prayer at St. Patrick’s Cathedral.

Day 4: September 25th- At 8:30 a.m., Pope Francis met with the United Nations Assembly. The pope next stopped by the World Trade center to hold a multi-religious derive at the 9/11 memorial to pay tribute to those who lost their lives. He placed a single white rose on the memorial in their honor. The next stop was Our Lady Queen of Angels School in east Harlem. He then led a procession through Central Park with over 80,000 people in attendance (USA Today). To finish off the night, Pope Francis held a mass at Madison Square Garden.

Day 5: September 26th- At 8:40 a.m., Pope Francis departed from John F. Kennedy Airport and headed to Philadelphia. He presided over mass at Cathedral Basilica of St. Peter and Paul in Philadelphia. After mass, he stopped by Independence Mall, the birthplace of American democracy. In the evening, Pope Francis attended the Festival of Families at Benjamin Franklin Parkway and there he held a prayer vigil with the World Meeting of Families.