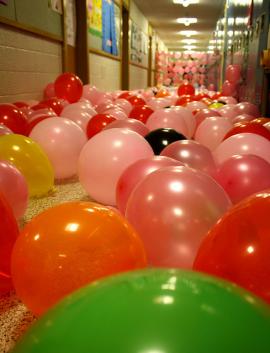 For seniors, all they can think about is what they can do at the end of the year that will leave a long lasting impression on the school. A senior prank is one way seniors can leave a mark behind that will be talked about for years.

The following are some creative senior pranks that other schools have committed. Some worked out perfectly, while some others did not turn out as planned.

Gone Wrong:
At Cascade High School, students stuck 12,000 Post-it notes to the windows and walls of the school. Anthony Canaday, one of the six suspended seniors, admitted, “We figured it’s cheap, easy, creative, it doesn’t damage anything.” This thought to be harmless prank caused the janitor of their school to be fired, since he allegedly gave the seniors a key. Students staged a sit-in to protest for the suspensions and the firing of the school janitor.

Seniors at Brentwood High School tied a lamb to a pole, relocated a 500-pound concrete bench, stole school banners, and splattered paint around the campus. The principal punished them by denying them to walk for graduation.

At Withrow High School, the principal canceled its prom to punish students for having a massive water balloon fight at lunch.

Creative Ideas:
Fill the main quad with helium balloons, beach balls, hay, or Styrofoam peanuts.
Bring alarm clocks and hide them all around school to go off at different times.
Add in some prank announcements into the daily school announcements. Things like “all freshman must obey the seniors” or “the class of 2015 is the best class this school has ever had.”
Cover lunch tables with aluminum foil.
Set a specific time for everyone in the senior class to break into a specific song and dance no matter where they are. When students hear that song in the future, they’ll remember the prank.
Write out the graduation year in the stadium. Plastic forks, plastic cups, or cocktail umbrella toothpicks are some things that could be used to spell out the year.
Decorate the school grounds with colorful chalk artwork.
Have a slumber party in the parking lot or stadium.
Park cars in a maze shape in the parking lot.
Put a giant “for sale” sign in front of the school.
Wind plastic wrap around the principal’s car.
Place posters outside of campus that say “school is closed today.”