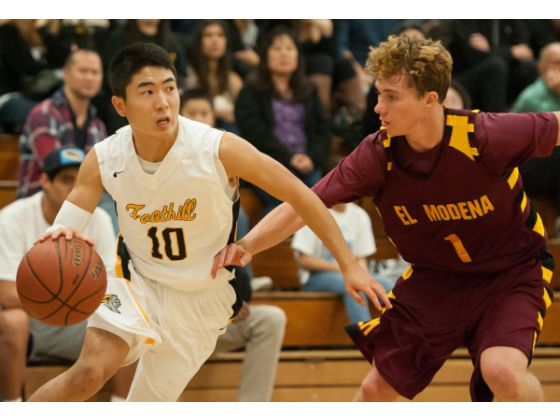 Ever since we were little, our parents and teachers told us to never discriminate.  We heard the stories of heroic figures of Martin Luther King Jr. and Rosa Parks. These adult figures in our lives have always tried their best to help us understand why we should not and cannot ignore what has happened in history. When did our generation decide it would be okay if we ignored these lessons? Recently, two high schools have caught the attention of the Orange County media with their student sections’ racial slurs. Foothill High School and Esperanza High School have been reported to chant racial slurs at basketball games over the course of this past month.

At a basketball game against Tustin High School, a student from Foothill High School held up a sign that read “#chunti.” According to the Orange County Register, “chunti” is a “usually offensive Spanish term meant to signify poor, rural Mexicans.” The soccer game between the two schools set for Friday was later cancelled. What has Foothill done to stop this? The administration banned posters from future games and are aiming to have an outreach between the schools.

At another basketball game between Esperanza and Foothill, the student section of Esperanza began chanting “shrimp fried rice” and “Jackie Chan” at senior guard, Reed Nakakihara. However, Nakakihara helped Foothill beat Esperanza by scoring 17 points to make up for a 16 point deficit. When interviewed by CBS Los Angeles, Nakakihara said, “I’d love to see the fans be able to chant things whatever they want, but they should refrain from when they get personal about race, maybe back off about that.” Esperanza’s administration is currently taking “appropriate steps to ensure that events of this nature do not occur again.” Dr. Ken Fox, Esperanza’s principal, informed us that “these actions are not reflective of the values or standards of Esperanza High School.”

These two aren’t the only incidents that have happened in Orange County. Mrs. Cheryl Garcia is the current activities director and swim coach of Santiago High School in Garden Grove and is the mother of current YLHS student, Alyssa Garcia, and YLHS alumni, Jazmine Garcia. When asked about the ongoing trend of racial slurs at sporting events, Mrs. Garcia commented that her school has been called names many times such as “Beaner School” and “Soggy Taco” instead of Santiago.  These “blatantly racist” comments were directed at the fact that Santiago High School has a large Latino population.

Oftentimes, in situations like these, it is extremely hard to pinpoint one single solution to these issues.  Mr. Eron Campuzano, El Dorado High School’s Dean of Activities, has never witnessed “any incidents where racial or derogatory comments were said from school to school”, but he advises students to “get to know more students from other schools. It’s difficult to ‘hate’ someone when you actually know them.”

In order to stop this, we must stop thinking these racial comments are okay.  These comments aren’t often thought of as derogatory until after it catches the media’s attention, and we can’t keep letting this happen.  Situations like these are not easy to solve, but with a more positive attitude towards other schools, we can eventually stop these racial comments.  All it takes to make this stop is a few students who are passionate about halting these comments.  Then these students can inspire others, and it becomes a chain reaction.

We all have the responsibility to try and make this world a better place.  Our generation must learn from the past and ensure that history does not repeat itself.  Despite the fact that it may be just comments at a sporting event, these racial comments and slurs should not be appropriate at any time.