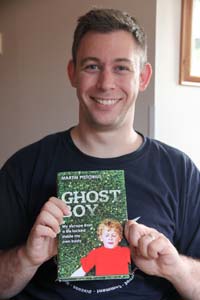 Imagine coming home from school one day with a sore throat.  It seems like no big deal, but this sore throat ends up putting you in a coma for twelve years.  Imagine being mentally awake but not physically.  This is exactly what happened to Martin Pistorius, a man in South Africa who was diagnosed with meningitis at the age of twelve and slipped into a coma for twelve years.

At the age of twelve, Martin came home from school one day with a sore throat.  The doctors later diagnosed him with cryptococcal meningitis.   As a young boy, he became extremely ill; eventually, this form of meningitis trapped Martin in a coma.  His parents, Rodney and Joan, started taking care of him every single day.  They would bathe him, feed him, and turn him in bed so he doesn’t get bedsores.  During the day Martin would be sat down in front of the television to watch Barney.

However, what the doctors and his parents didn’t realize was that when he was around 14 or 15, he slowly began to wake up.  He eventually was aware of his surroundings, but he couldn’t get his body to move.  It was the same mundane routine every single day, but Martin felt so far away from the world.

During this time of distress, Joan told her son, “I hope you die,” with her eyes full of tears.  Four words a child never wants to hear from his mother.  She didn’t realize that Martin had heard these words, and those four words made him feel even more alone than ever.  Martin recalls this memory and says, “The world felt so far away when she said those words.”  He eventually came to understand that his mother had said these words out of despair and eventually forgave her.

It wasn’t until he was around twenty-four years old when he began to wake up from his vegetative state.    Eventually, Martin began to get his life back.  He now moves with a wheelchair and speaks with a voice synthesizer.  Today, Pistorius, now 39 years-old, is happily living in England with his wife Joanna.  He has written a book entitled Ghost Boy describing his story about his coma.  Despite the fact that this book was published in 2011, his story has just recently caught the world’s attention. Caitlyn Ortiz (10) says, “I can’t even imagine how his parents felt during this time.  His ability to speak up about his story and share this emotional experience to the world is truly something special.  I am touched by how he has found happiness after being in a state like that.”

We all go through hardships in our lives; some worse than others.  Martin Pistorius was able to turn these twelve years around and find true happiness with his wife.  He has conjured up the strength to share this emotional story with the world and turn it into a feel-good story.  It is admirable that Martin has found true happiness despite what he had to suffer through.  We often take life for granted, but it is not until we endure a hardship when we realize how precious these fleeting moments are.  Like Martin, we have to understand how to turn one of the worst moments in our lives into something positive.