Why Are Kids So Stressed These Days? 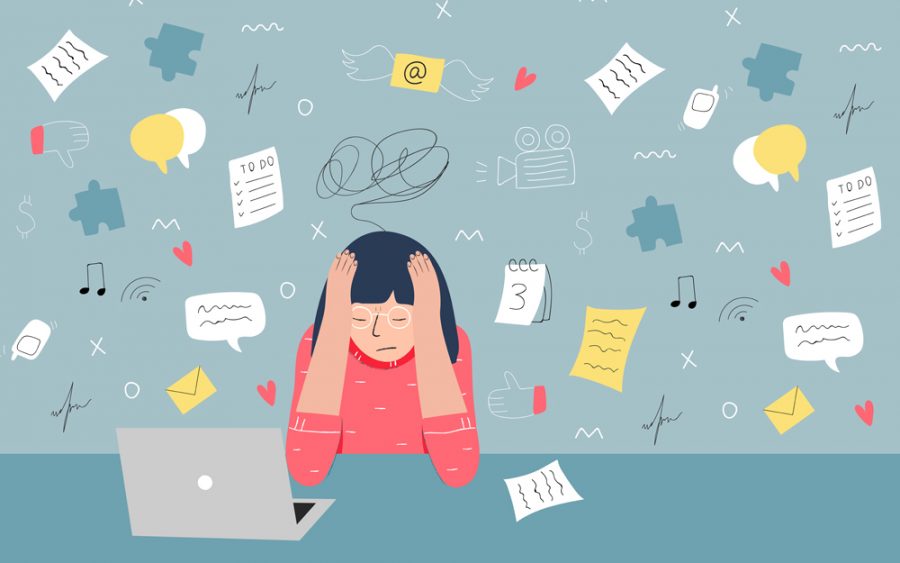 Compared to years past, teens are facing more stress today than ever as a result of issues in society, pressure to do well in school and the image of people presented on social media.

In the busy atmosphere we live in, it is normal to feel stress from time and time with the rapid movement of our lives. Whether it be lots of schoolwork or being nervous about an event, stress is something that can be mild and only last temporarily. However, in recent years, more than ever stress levels have been increasing in teens, causing major concern to their health.

With all that is going on in our world, it is honestly no surprise to see teens are more stressed than ever before. There are a lot more societal issues that can worry teens, such as rising suicide rates, climate change, immigration separation, and violence in areas to name a few (developmental science). According to some statistics supporting this evidence “since 2013, teens have reported higher levels of stress than adults. In the 2018 APA survey, teens reported worse mental health and higher levels of anxiety and depression than all other age groups” (developmental science). The world has put a lot more focus on societal change and highlighting these issues on the news more frequently, often putting students in a panic as they feel they have no control over these issues or try to invest their time in trying to solve these large-scale issues and feeling hopeless. Additionally, a lot of this stress is a result of seeing these issues on social media too, as the images and words used to portray these tragic events can often be very disturbing or dramatic, making it easy to stick into teens’ minds and overwhelm them.

Many can also agree that school has become even more consumed with the amounts of homework given, especially with honors and AP students. Celina Fang (10), a highly academic student who participates in a lot of extracurriculars, explains that “the amount of homework given and challenging classes has made [her] time in highschool less enjoyable, as [she] is spending hours on end completing assignments when she could be using that time to do activities [she] enjoys.” While this is true, a lot of this stress has to the with the classes students are taking as well, as “in 2009, 13% of students were taking a rigorous course schedule, but in 1990, only 5% of students were taking the same level of classes” (business insider). This is due to the competitiveness of getting into college, and students feel pressured to do better than their peers to stand out. Though many are able to handle the stress of these classes, for some the side effects it can bring to their mental health isn’t worth it in the end, so it is important to keep in mind that if you are becoming too stressed by the classes you are taking, it is alright to make an easier schedule for yourself to focus on your mental health.

Though talked about frequently, it is important to mention that social media also plays a huge factor in why teens are so stressed these days. Seeing people with a certain body image or seeing your friends hanging out without you can stress you out and make you think you aren’t doing good enough for yourself. However, social media is made for people the post the happy and perfect side of themselves, and it shows nothing about who they truly are as a person. A lot of the photos of celebrities that may make them look flawless are often edited too to give them that look, which is not something that comes to everyone’s minds when they first see the photos. In fact, this is such a common practice that when asked, 64% of people admit to editing the photos they post online (Penn Medicine). To prevent your self-esteem from going down when looking at these photos, it is important to remember how most of these are edited, and if you are still feeling down from these posts, taking a break from social media altogether is a great idea to help improve your mood again.

Considering the alarming number of different ways that cause teens to become stressed, teens are now facing the consequences of mental health issues that come with it. According to a mental-health survey conducted, “70 percent of teens say anxiety and depression is a “major problem” among their peers, and an additional 26 percent say it’s a minor problem” (NEA News). Anxiety and depression should not be the new norm for teens, as they should be experiencing life without much worry in order to get the most out of it, so it is very disheartening to see how so many teens are now suffering from these issues often as a result of stress.

With all of the overwhelming information we receive every day in life, it is important to remember to breathe and take a minute to not think about things we ourselves can’t completely control. Meditating for just five minutes a day to reflect on your stress and any areas of tension can help you better recognize your stress, making it easier to release it and not hold it in your body all the time, often causing stiffness in your neck, head, or back. Celina Fang (10), who experiences lots of stress like many other high school students, says that “[she] likes to destress by talking to friends, playing games, and watching TV.” Doing relaxing activities can help reduce the stress levels many are facing today, and little things like this can help people find moments of relief in this world.