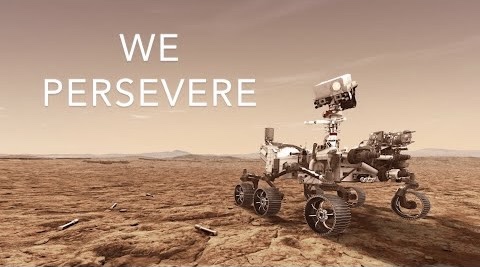 NASA’s Perseverance rover has successfully landed on Mars and will soon begin to search for signs of ancient life.

Thursday, February 18, 2021, just before 4 p.m. EST, NASA’s Perseverance Rover initiated its descent towards Mars’ surface after traveling 293 million miles through space. The spacecraft holding the rover began its entry, descent, landing (EDL) sequence, where each part of the sequence would need to be executed perfectly for a successful landing. With the help of parachutes, retrorockets, and lowering cables, Perseverance was safely lowered to the ground in the Jezero Crater, where it sent its first picture to NASA’s Jet Propulsion Laboratory, confirming its arrival on the Red Planet.

Perseverance is currently NASA’s largest and most advanced rover. It is equipped with 23 cameras, a robotic arm, tools for collecting rock samples, and a microphone. According to Space.com, this is not the first time a microphone has been brought to Mars, but it is the first time the microphone will be used to record sounds during a rover’s EDL sequence mission on Mars. Perseverance also holds a helicopter-like drone called Ingenuity, which will be the first flying device to be tested on Mars. Tests will evaluate how a rotorcraft will fly in the thin Martian atmosphere and if it can survive the harsh temperatures at night. If all goes well, Ingenuity will provide NASA with another tool for the exploration of the planet.

After the Curiosity rover discovered water on Mars in 2012, researchers at NASA are now looking for signs of extraterrestrial life. The Jezero Crater where Perseverance landed was once a river delta that dried up 3.4 billion years ago. Tanja Bosak, a geobiologist working on the Perseverance mission, states that “in the ancient dried clay of the delta, there may be microscopic fossils of microbial life, or geological pattern indicative of life.” Perseverance will also be storing samples of rock that are planned to be sent back to Earth on a future mission. The samples will hopefully guide scientists to the answers to questions concerning the creation of life on both Earth and Mars. Analise Hopper (10) hopes that with the new technology, “Perseverance can help researchers at NASA find signs of life on Mars because [she] was curious about it since [she] was young.”

In addition to being a monumental tool for the exploration of Mars, Perseverance serves as an inspiration to humans. Past rovers that have traveled to Mars have been named after human qualities, such as Curiosity and Spirit. Similarly, the name Perseverance, chosen by Alexander Mather in an essay-writing contest, embodies a characteristic that keeps humans going no matter how difficult something is. This quality has been especially important throughout the past year with the coronavirus pandemic, where people were faced with hardships they have never seen before. However, despite the difficulties, people have kept going and overcome obstacles that have led to achievements such as Perseverance’s landing. Anything is possible if we never give up because, just as the rover’s first tweet from Mars says, “Perseverance will get you anywhere.”