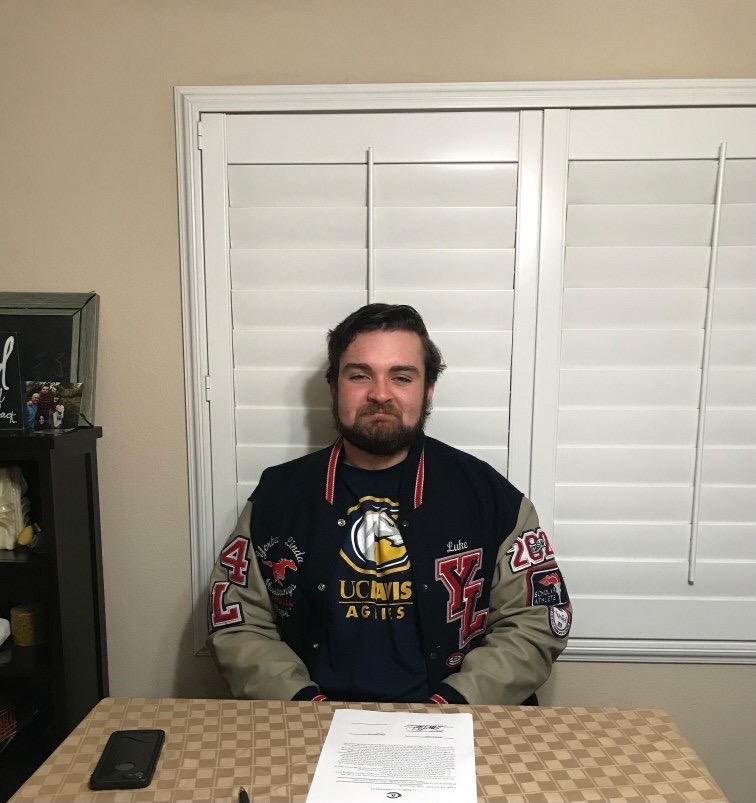 Luke Roncevich poses in front of his letter after he completed committing to play football at UC Davis.

This past month, the Yorba Linda High School Football team added another player to the list of student-athletes playing at the collegiate level. Senior, Luke Roncevich (12) decided to sign to UC Davis.

Roncevich has been a part of the football program for 3 years now. He started playing on the freshman team and had the opportunity to play varsity his sophomore year. Outside of football, Roncevich volunteers with a nonprofit organization that “helps young athletes learn to life, exercise, and play football.” Giving back to the community that helped him so much with his future was his biggest priority during his senior year.

Roncevich’s football career was not the most usual of paths, but it is one that he is proud of. He had played baseball his entire life and then in his freshman year, he decided to play football. Luke loved the sport and had “some of the best coaches in Orange County teach [him] the amazing game.” It was not until the Villa Park game last year where the Mustangs defeated the Spartans that Roncevich knew he had a “legitimate shot to play at the next level.” This game was also Roncevich’s favorite memory at Yorba Linda High School because it helped them win league and it had proved that all of their hard work paid off.

The journey to UC Davis had started in March 2020 when one of their coaches reached out to Roncevich. COVID had unfortunately stopped him and his family from visiting the coaching staff on campus. However, in November, the call was made and he was offered a scholarship. After a lot of thinking, Ronceivich made it official in January that UC Davis was the place for him.

When asked who Roncevich’s biggest football idol is, Roncevich said that it is for sure his father. Roncevich’s father “is simply [his] hero when it comes to anything sports-related.” His father has come to every game and has become his number one supporter even sitting “in the same spot with binoculars so he can focus” on his son on the field.

As far as future plans go for Roncevich, he is looking forward to attending Davis “to study Biological Sciences and look for a graduate degree to earn a doctorate degree.” Roncevich wants a future in occupational therapy or possibly becoming a rehabilitation doctor and work with young children after traumatic injuries.

Lastly, looking back at his 4 years, the best advice Ronceivh can tell his freshman self is to “be ready for change. Things change for the better and for the worse constantly. Without change football and UC Davis would never have crossed my mind. Also, hard work always wins, as cliche, as it sounds I was never the biggest, smartest, or the best. I gave everything 100 percent of my effort and it all worked out.” These words can be inspirational for all Mustangs, whether you are alumni, a current student, or future Mustang.

Overall, we Mustangs are very proud of Luke Roncevich and are so thankful for all that he has done for our Yorba Linda High School community. He has worked so hard on and off the field and in the classroom and all of his conscientious work has paid off. We cannot wait to see what the future holds for you, Congratulations, Luke!