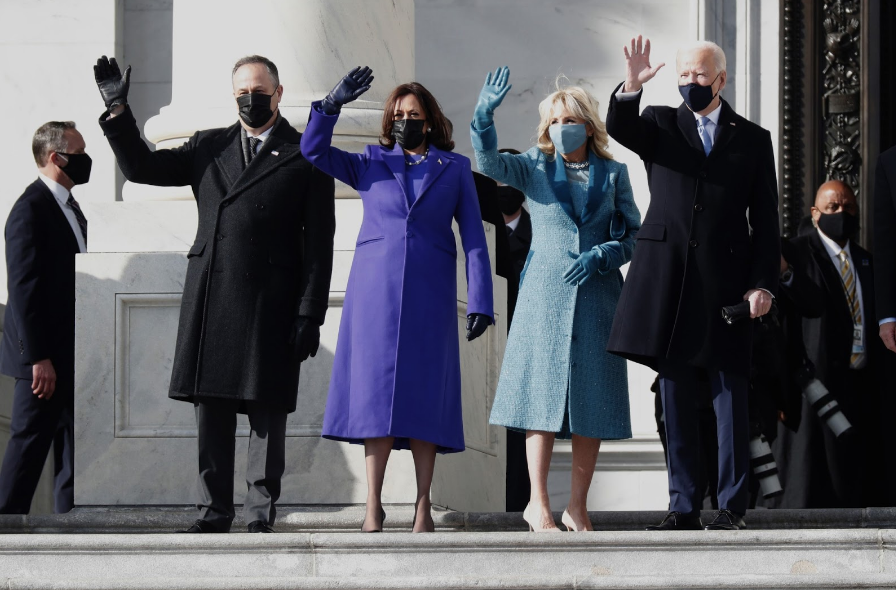 Courtesy of the Los Angeles Times

With both of their partners beside them, newly confirmed Vice President Kamala Harris and President Joe Biden wave to the American people as they begin their new terms.

Today, January 20th, Donald Trump’s presidency came to an end as Joe Biden took the oath of office, swearing to “preserve, protect and defend the Constitution” at 11:49 a.m., becoming the 46th President of the United States. Using a Bible that has remained within his family for 128 years, Biden recited the 35-word oath, confirming the start to his term.

Not long before Mr. Biden, Kamala Harris took her historical oath of office, making her the highest-ranking woman ever in the United States, as well as being the first Black American and first person of South Asian descent to hold the Vice President title. Similar to Mr. Biden, Harris placed her hand on a meaningful Bible for her oath, using one that belonged to an acclaimed civil rights activist and Supreme Court justice, Thurgood Marshall.

This Inauguration made history in many ways, from Ms. Harris being the first female Vice President to the climate in which it took place, as each attendee sported a mask to prevent the spread and attraction of the current virus, COVID-19. Although, the biggest difference between this Inauguration and past ones, was the refusal of attendance from the 45th President of the United States, Donald Trump. Mr. Trump became the fourth president to not attend his successor’s transfer of power ceremony, being the first to do so in over 150 years.

Due to the violence that took place at the Capitol building on January 6th, with Trump-supporters storming the monumental structure in defiance of Congress’ counting of Electoral votes, security for today’s Inauguration was multiplied. In the prevention of events similar to those of two weeks ago, 25,000 National Guard troops protected the U.S. Capitol and Inauguration attendees.

Before Biden could be officially sworn in, Donald Trump had his farewell event at Joint Base Andrews before he got onto his last flight on Air Force One, leaving for his Florida resort, Mar-a-Lago. In his final address to the American people as the 45th President, Trump reflected on his four years, saying “We were not a regular administration.” Following, he touched on the future president’s term without naming Joe Biden, as he said “I wish the new administration great luck and great success.” With emotion visible throughout his crowd of supporters, Trump left on a positive note, exclaiming, “Goodbye. We love you. We’ll be back in some form, have a good life.”

Despite the controversy surrounding this historical day, the Inauguration ran smoothly. President Joe Biden gave his Inaugural Address to the people of America, reassuring that, “This is America’s Day.” He followed with the sentiment, “This is democracy’s day.” When speaking on the current division America has experienced over the years, Biden added, “We must end this uncivil war that pits red against blue, rural versus urban, conservative versus liberal. We can do this if we open our souls instead of hardening our hearts.”

Yorba Linda High School student, Olivia Yerkes (12), recounted the events of today explaining that she “watched the Inauguration in [her] third period AP Government class.” The Inauguration occurred during the YLHS school day, so many missed the live broadcast. She added by saying she “will remember watching this historical transfer of power ceremony over Zoom, as it was an unforgettable event.”

As for today, President Joe Biden has already signed three of 17 planned executive actions, creating momentum already, only on the first day of his term. According to NPR, “The signed actions include a mandate for masks on federal property, a second about underserved communities and a third to have the U.S. rejoin the Paris climate deal.” President Biden explained that there is “No time to start like today,” following with “We have a long way to go.”