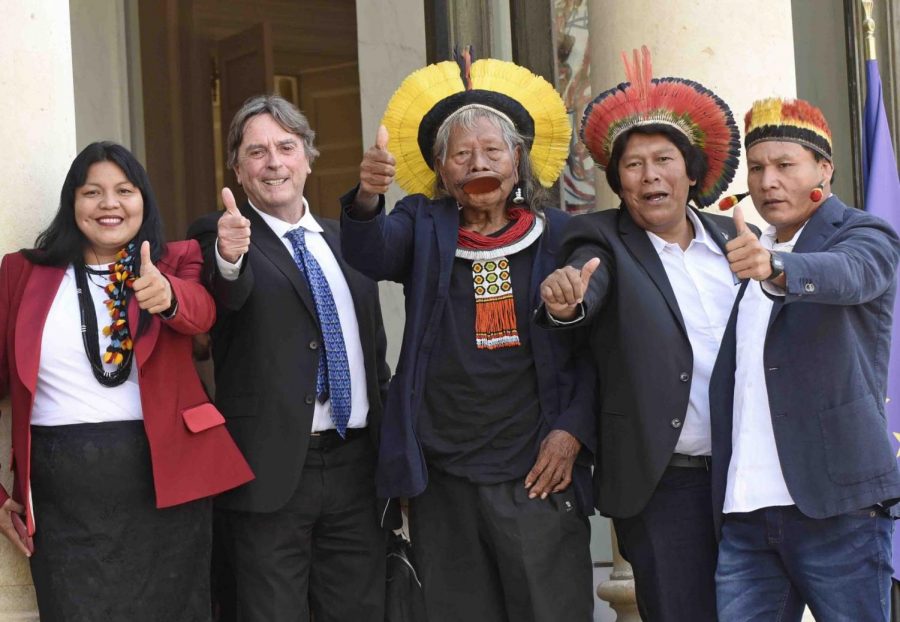 Tapi Yawalapiti (far right) spoke about endangered languages due to COVID 19 in Belgium on May 17, 2019.

Aritana Yawalapiti knew that he was dying from the coronavirus and his son, Tapi, would be the next leader of what was left of their tribe. On his deathbed, Aritana knew five languages but primarily spoke in one language that no other person on earth could speak. As for the other four languages Aritana was fluent in, the number of people who speak those languages has decreased from three to two after Aritana‘s death.

Now that coronavirus is officially a global pandemic, it has managed to endanger a number of uncommon languages throughout the world by killing vulnerable indigenous people across continents. In Peru, coronavirus has put many rare languages at risk in the Loreto region. In Australia, the last person fluent in the languages of Warriyangga and Thiinma is at risk of becoming infected with the virus. In India, hundreds of languages are at risk of extinction since it is the country with the second most endangered languages. Now in Brazil, where Tapi Yawalapiti is desperate in his attempt to save the lost language of his father. “It is so unfair that indigenous tribes have to suffer [like this] from the coronavirus,” as stated by Drashti Vasoya (12).

“By the end of this century, we will have a significant number of languages disappearing,” according to a member of the U.N. Cultural Agency, Irmgarda Kasinskaite. Most people do not realize this, but when a language ceases to exist the world is losing a concept or history, art, culture, and tradition that can never be regained. Hence why the Chair of the United Nations Permanent Forum on Indigenous Issues, Anne Nuorgam, “urge[s] Member States and the international community to include the specific needs and priorities of indigenous peoples in addressing the global outbreak of COVID 19.”

“My father said, ‘You can never let [the language of the Yawalapiti] die. The language is part of our culture. If the language dies, the people will lose half of their culture,” explains Tapi. He is currently on a mission to salvage a language he knows little about. Nevertheless, Tapi traveled to the University of Brasília in order to learn more about the original language of his tribe. There, he studied words, identified grammar, and wrote a textbook that is meant to teach future generations of his tribe.

Years later, Ana Suelly Arruda Câmara Cabral, a linguist at the University of Brasília who supervises Tapi’s work, informs us that “there are only two [people fluent in the Yawalapiti language]… so what will become of the Yawalapiti?”

Although a majority of the tribe is not interested in learning Yawalapiti, Tapi is incredibly hopeful and claims, “I will not let it disappear.”