Everything You Should Know About Amy Coney Barrett 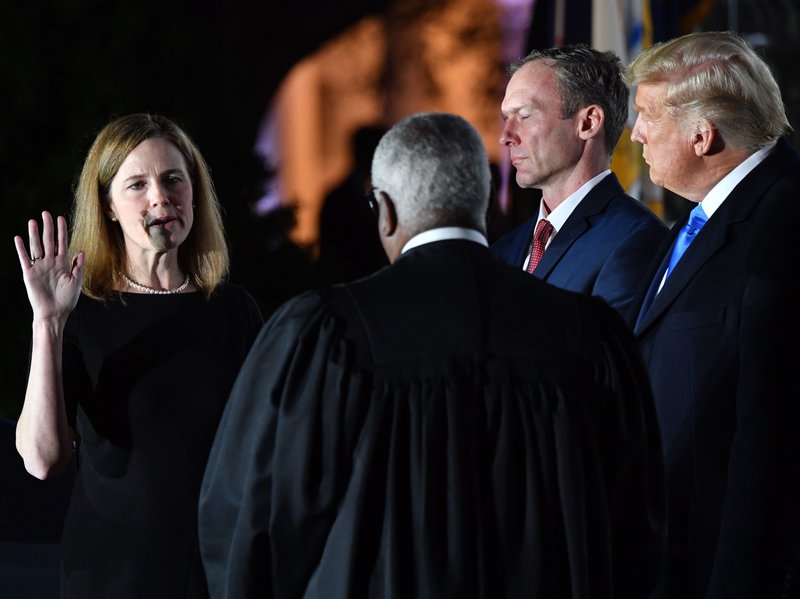 Amy Coney Barrett being sworn in as a US Supreme Court Associate Justice at the White House in Washington, DC.

While Barrett was serving on the 74th Circuit Court of Appeals, President Donald Trump hinted that he would choose a woman to be placed in the Supreme Court, and he declared Barrett as a potential nominee soon after the death of Ruth Bader Ginsburg. “I think she is a phenomenal representation for women and was an excellent choice,” explains Siena Palicke (12), “because of her religious strength, intellectual brilliance, political integrity, and her amazing mothering abilities.”

Certainly, it is no secret that this nomination has created some tension between political parties, especially with Barrett being confirmed just a week before Election Day. Nevertheless, she has been properly approved as a member of the Supreme Court, so here is what you should know about Amy Coney Barrett:

First and foremost, Barrett is fairly known for her conservative record. Barrett has declared herself a devout Orthodox Catholic and has stated that “life begins at conception,” leaving many to assume that she would vote to overturn Roe v. Wade, which legalized abortions (Notre Dame Magazine). Barrett has also leaned more conservatively on a number of topics from the Affordable Care Act to guns. It should also be mentioned that Barrett has made people uneasy with the accusations of her affiliation with People of Praise, a controversial Christian group with uncommon teachings on family relationships (The New York Times).

Because of her deeply held religious beliefs, it is not a surprise that Barrett is occasionally in a disagreement with Democrats. For example, during Judge Amy Coney Barrett’s confirmation hearing in 2017, California Democrat Senator Dianne Feinstein made an anti-religion remark towards Barrett saying, “The dogma lives loudly within you, and that’s of concern when you come to big issues that people have fought for years in this country.”

After graduating from Notre Dame Law School, Barrett clerked for Justice Antonin Scalia. Then, Barrett worked as a professor in law at Notre Dame Law School for about twenty years, up until becoming a member of the 74th Circuit and remaining there for less than three years. Still, Barrett’s time on the bench is short compared to most of her colleagues, causing both political parties to be somewhat uneasy about her legal opinions. Even so, President Donald Trump claims that “[Barrett is] very highly respected.”

At just forty-eight years old, Barret is now the youngest justice in the Supreme Court. For the next few decades to come, Barrett will have immense opportunities to leave behind a lasting mark in the judicial system. Therefore, let’s congratulate Amy Coney Barrett for being the fifth woman to ever serve in the Supreme Court and hope that she serves and represents the people of this country well!