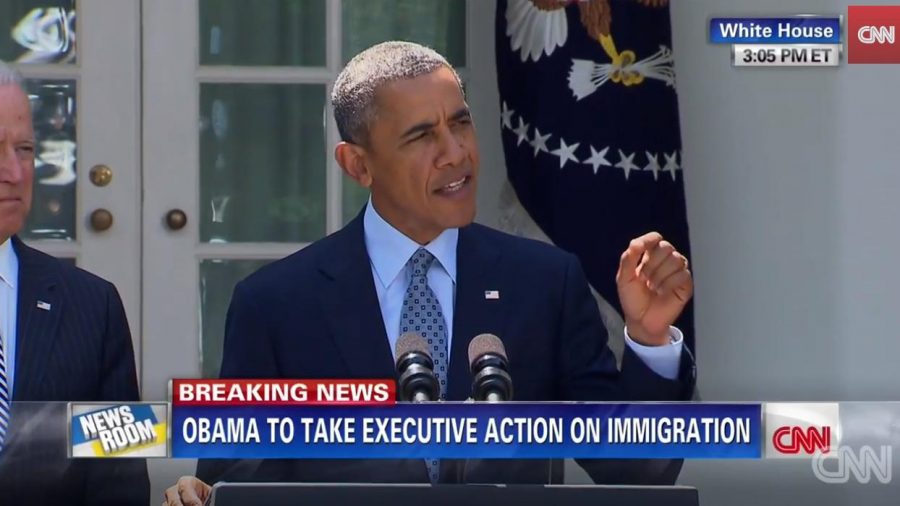 The President recently announced his plans to sign an executive order on immigration. Courtesy of CNN.com

Thursday night, President Obama gave a speech announcing an executive order that would be signed in regards to immigration. The executive order will allow an estimated five million illegal immigrants, who fit the requirements to remain in the country, without the threat of deportation. These requirements are that one must not have a criminal record, have resided in the country for at least five years, and be the parent of a legal US citizen. Another component of the executive order is that it extends the Dream Act, an executive order that was signed in 2012 by President Obama that gives work permits to young undocumented immigrants that came to the United States when they were very young. This executive order is not comprehensive immigration reform. This is simply regarded as a step toward the overall goal of a bipartisan immigration overhaul.

President Obama has been in favor of an immigration bill since the beginning of his presidency, but recently he has been fervently pushing for reform since the Democrats lost the Senate in the 2014 midterm election. The President is using the issue of immigration as a political tool to assert his dominance over the soon to be Republican controlled congress. Clearly, the executive order is being used to pressure the Republicans in more than one way.

First, the president hopes that very conservative Republicans will just, in general, freak out. He is trying to elicit a reaction; he wants them to condemn his actions, question the legality of it all, and maybe even consider articles of impeachment. The president knows that this will be an overwhelmingly unpopular response, and hopes that it will stunt the GOP’s momentum after their recent election win.

Second, he is trying to manipulate the less conservative Republicans into drafting a comprehensive, bipartisan immigration reform bill.  Hispanic Americans are the fastest growing voting block in the country and many Republicans feel that the reason they aren’t as popular with Hispanic Americans is because of their resistance to immigration reform. If Republicans want to win the White House in 2016, they are going to need to get close to or above 40% of the Hispanic vote. This hasn’t been done since 2004 when George W. Bush got 44% of the vote. Therefore, many Republicans are willing to pass a bipartisan immigration reform to improve the image of the party with a very important voting block. Despite this, many Republicans, like Senator Marco Rubio (FL) genuinely want to pass a reform bill. In 2013 he and seven other senators were a part of the “Gang of Eight” which consisted of four Republicans and four Democrats who drafted a bill of immigration; however, momentum for the bill fizzled in the lead up to the 2014 midterm elections.

The best way Republicans can handle this issue is to work with the President and Democrats to draft a bipartisan bill that will do the following: