The Five Stages of Quarantine 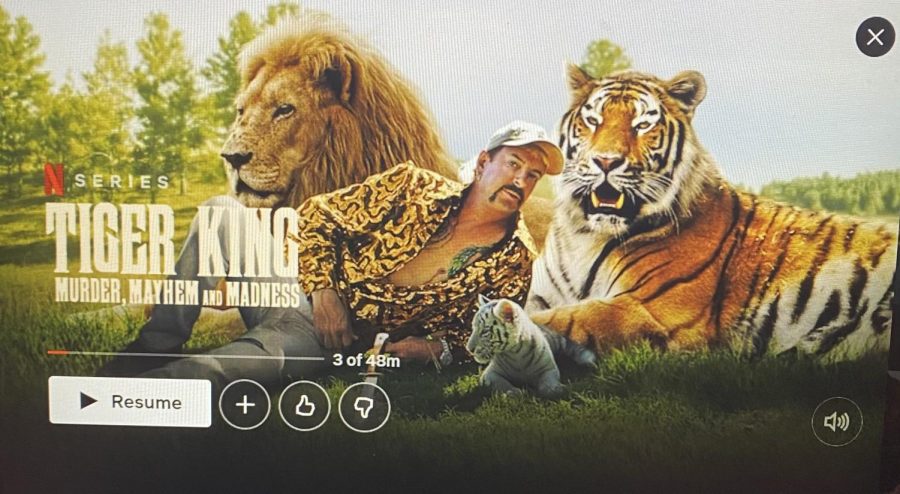 Tiger King is a hit Netflix Documentary that went viral. over quarantine.

Over quarantine, everyone was overwhelmed with an abundance of free time and nothing to do with it. However, a combination of free time and boredom can only lead to one thing, new trends. People started new projects and experimented with all the new trends that surfaced over social media. Let’s take a flash to the past and look at the five most popular trends that went viral over quarantine.

Starting off at number one, baking was a trend that swept quarantine during the beginning of March. Baking was the first trend that came out of quarantine, focusing on goods such as bread. This was when the boredom of quarantine really set in, and people were dying to try out new things. Camille Khong (10) said that “she took up baking as a new hobby over quarantine and it was something that made passing the time fun and easy.” People shared their baking through Instagram stories and TikToks posts, showing off their little projects. Some of the most common treats that people made were different kinds of bread, especially banana bread. This trend was definitely a two in one, providing a new project to experiment with and a delicious treat to snack on.

Next up, the Netflix documentary Tiger King by Eric Goode hit number one on the Netflix top ten in the U.S. and got everyone hooked during quarantine. Taking place in an Oklahoma zoo, this documentary followed Joe Exotic and his life surrounding big cats such as lions and tigers, and the wild adventures tied with them. With over the top personalities of the people in the series along with the scandal surrounding another cat owner, Carole Baskin, this show caught the attention of millions of viewers throughout the country.

Coming in at number three, Animal Crossing is a Nintendo Switch game that went viral over quarantine, being the perfect way to utilize time throughout the day. This game mainly attracted the younger generation, however, it is fit for all ages. In Animal Crossing, one can create an island full of different animals and decorate it as they wish. People even created channels on YouTube to show off their islands and share it with the world. From having to earn coins and materials, along with building and designing homes and different places for the animals on the island to use, this game is a great way to pass the time.

At number four, dalgona coffee, or whipped coffee, was a drink that people were eager to make and try for themselves. Reaching its fame from TikTok, teens across the country were trying out this new kind of coffee where you whip it with a mixture after brewing the drink to add a foam consistency. Though the end result of this project was not as exciting as the process to make it, it was still a fun DIY to try.

The last trend making the list today is tie-dying. Hitting its trending peak in April, tie-dying made a comeback in the fashion industry and was a new DIY project to try out at home. Using bleach and other colored dye to tie-dye items like tank tops, shirts, jeans, and sweatpants, owning a tie-dyed piece of clothing is now a staple. If you were not into doing the whole process, stores also had a peak in tie-dyed clothes, making it more and more common to see someone out and about wearing tie-dye.

Quarantine was a time of experimentation and taking on new projects. It helped many people get through the boring days and added a sprinkle of joy into many lives. The trends reviewed today were only a fraction of what was seen throughout the past months in quarantine, and more and more trends are hopefully on their way.