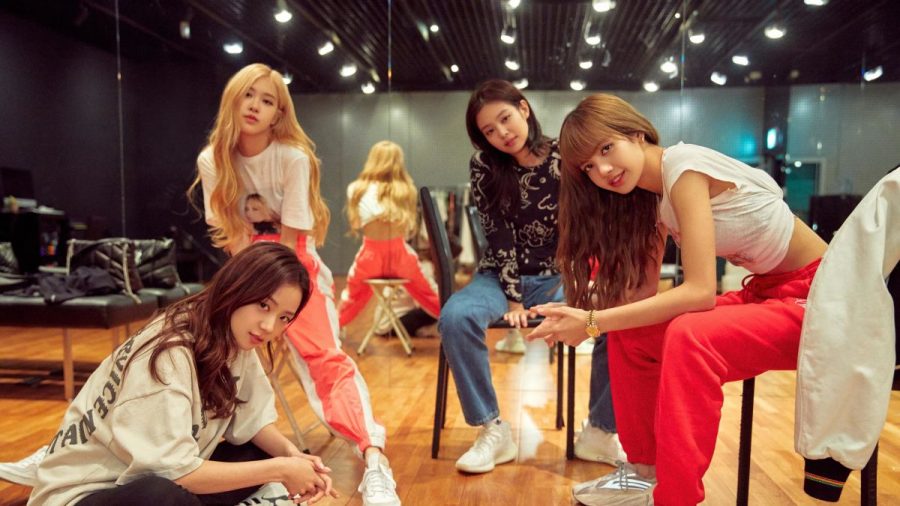 All four members of Blackpink pose here in the dance studio they trained in for four years as trainees prior to their debut in 2016.

In August, 2016, the song “Whistle” was released as the debut single for the Korean-pop girl group Blackpink. Within days, “Whistle” had topped South Korea’s music charts, with Blackpink being the first and only group to do so with a debut single. Two years later, their June single “DDU-DU DDU-DU” became the first music video by a Korean-pop group to reach one billion views on YouTube.

At the 2019 Coachella festival, the group broke records by becoming the first Korean-pop girl group to perform at Coachella. Today, Blackpink continues to see smashing success as the most followed girl group on Spotify, with millions of fans (called BLINKS) spanning from Seoul to Los Angeles to Amsterdam. But how did Blackpink become Blackpink? Netflix’s recent documentary, Blackpink: Light Up the Sky tells the story of the group’s four girls — Rosé, Jisoo, Lisa, and Jennie — and their path to success.

The film opens with a clip of Blackpink’s “Whistle” debut performance three years prior and cuts quickly to the details of Blackpink’s success, including naming some records the group has achieved and snippets of their most popular song “DDU-DU DDU-DU.”

Next, it’s the group’s normal day at the studio; they relax on the sofa, have their snacks, and converse as their chief music producer, Teddy, plays the girls’ past beats to enjoy. The scene portrays the girls’ chemistry with each other, having trained together for four years in a boarding school tailored to bring up the hottest Korean-pop prospects. After, each of their individual backgrounds are explored and individual interviews are conducted as the girls share their story from humble beginnings of singing and dance.

One-by-one, their backstories are revealed. Starting with Jennie, it details her early life living in South Korea to her teenage years living in New Zealand. This included old childhood videos and an interview in which she detailed her inspiration to become a singer.

Next, Lisa documents her background from Thailand and her history with music, as well as an interview of her discussing her struggles as a foreigner from southeast Asia moving to Korea with little grasp of the language.

After comes Jisoo’s backstory, the only member to have lived all her life in Korea. She comments on her struggles with her appearance in her past and her introduction to Blackpink by YG Entertainment, as well as opening up on her decision to pursue a career in music.

The last is Rosé. Having grown up in Australia, Rosé reveals in her interview the difficulties of moving to Korea and sharing a close bond with Lisa as a foreigner with little handle on the Korean language. The documentary also includes clips of Rosé’s talent when singing as a child, to a teenager, and finally to a Korean-pop star. Each girl’s auditions are also included in the film to emphasize the visible change from studio trainees to Coachella stage performers.

Personally, despite being a documentary, Netflix’s film was very enjoyable to watch. Although I don’t follow Korean-pop, I find Blackpink’s music very unique and was excited to watch the film as it also provides insight into the difficult steps that aspiring Korean-pop artists take to break into the industry.

My favorite scenes in the movie were that of Blackpink’s moments of success, such as clips of their hit performances, award scenes, and scenes of being greeted by massive crowds of fans when they step off the airplane. Wherever in the world they are, they have BLINKS who are thrilled to see them, marking Blackpink as an international hit. “Blackpink definitely takes inspiration from western pop and trends but simultaneously conforms to typical mainstream Korean-pop,” says Amber Han (11). “They have the popularity to experiment in any way they want with the typical Korean-pop song formula and stray from the norms.”

However, as a documentary, I would not recommend this film for viewers uninterested in the field of Korean-pop or Blackpink’s music, as it focuses exclusively on such subjects. But for BLINKS, Korean-pop fanatics, or those interested in the Korean music industry, Blackpink: Light Up the Sky will most certainly prove to be an entertaining and informative film on the rise to success of the four-year phenomenon that is Blackpink.