Interviewing a Firefighter on This Year’s Fire Season 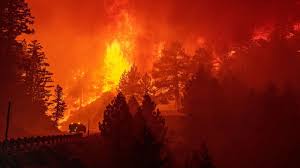 Here is the Bobcat Fire, one of the hundreds of fires that have burned in this year's fire season.

Every year, fire season in California has been getting progressively worse than the years prior. The gray skies, asthma triggering smoke that lowers visibility, the burning temperatures and dry winds fueling these fires are all common signs of fire season in California. These fires have burned millions of acres, and though many are not sure of the cause of many of them, climate change and arsonists are most likely to blame for a majority of them. Many have been wondering about the increase of fires or the reasons why they are so big, but many have not been able to find answers.

Firefighter Toby Belknap, a firefighter in San Bernardino, has some information regarding these fires. Though he has not been sent to fight these larger wildfires, a few years ago he was sent to fight a large forest fire in Big Bear for several days and worked to protect properties that could have been burned. He has worked on smaller local fires this year that were able to be extinguished within just a few hours and didn’t grow into the massive ones seen on the news today.

He believes the reason for a sudden increase in fires is because of the amount of fuel available such as dead trees and shrubs from droughts, bark beetles, and “less forest management through logging and thinning the forest directly affect an increase in fires” (Toby Belknap). These factors coupled with high winds and low relative humidity cause fires to grow rapidly and prove difficult to manage. Climate change is a possible contributing factor but would likely be a longer effect on these issues as opposed to a sudden change in increased fire activity. (Toby Belknap).

These fires are vastly different than years past because areas that have not been burned in a long time and have a cumulation of dead vegetation are now burning and making the fires easier to spread more quickly. A reason why many homes are being destroyed as well is that more homes are being built close to forests and areas that have lots of dry and dead vegetation. In terms of having controlled fires to reduce this, [he] says that “In years past the forest service would do prescribed burns to help thin forests and reduce fuels, which can promote new growth. Due to regulations on air quality management, this practice is now more regulated and can cause more build up of dead trees and brush on the forest floors.”

In terms of fire season, there have also been conflicting information on if fire seasons are getting longer or not. Toby Belknap says that he has seen both a variety of long and short fire seasons in the five years he has been a firefighter. An average fire season starts in April and ends around November. When fire season starts, California then employs “seasonal firefighters” which he says is for additional staffing. Factors like droughts and wind conditions like the Santa Ana winds contribute to larger fires later in the season like November and December. However, he says that California doesn’t seem to have a fire season anymore, as fires tend to be occurring year-round now. In terms of fighting fires out of season, [he] says that “I have personally been on fires in January which would not be considered a high-risk time of the year, but due to droughts and winds this is still a problem in California.”

As with any fire, there are always some difficulties and potential risks when fighting them. Typically the difficulties will depend on the location of the fire, resources available, and human evacuations. Fires that are most difficult to reach are those located deep in forests or high on steep terrain in the mountains. This is where helicopters and planes are necessary to help fight them. Heavily populated areas with minimal roads are a big issue too because many people evacuating at the same time could cause traffic jams and delays for the firetrucks to get to the fire. Additionally, when multiple large fires are burning at once there is often a strain on available resources such as additional firetrucks and aircrafts. A potential risk with this is that small fires that are not extinguished right away can escalate into large fires that can damage property and burn large areas in forests.

To adapt to these fires, some changes have been made to their resources and what they use to fight fires. There has been an increase in planes and helicopters used to help extinguish fires since they have water dropping capabilities. He also says more effective foams are retardants are being developed to aid in slowing the spread of fires. Additionally, “new tools and technology are being developed to try and prevent fires from starting by certain equipment like power lines and transformers” (Toby Belknap).

When asked about his thoughts on this year’s current fire season, [he] says that “This year’s fire season has had the largest fires and most acres burned in history. It’s devastating to see homes and communities lost by fires. I am proud of all the hard work being done by firefighters to help prevent the loss of life and property by these fires. These firefighters are working tirelessly for days, weeks, and months on end to help protect the communities. I am grateful for the opportunity to work alongside these men and women who are truly heroes.”

Hearing all of this from an expert in the field can help people better understand the fire season and some major causes and solutions for it. I was personally surprised to find that there are now regulations for these controlled fires, which have an impact on the fires and their size. Sophie Zhang (11), among many others, is thankful for our firefighters, saying “I think it is very heroic that so many firefighters have to risk their lives to fight the increasing amount of natural fires.” Overall, having such amazing firefighters that want to help better our community is something we should not take for granted, but instead, be thankful for how fortunate we are.