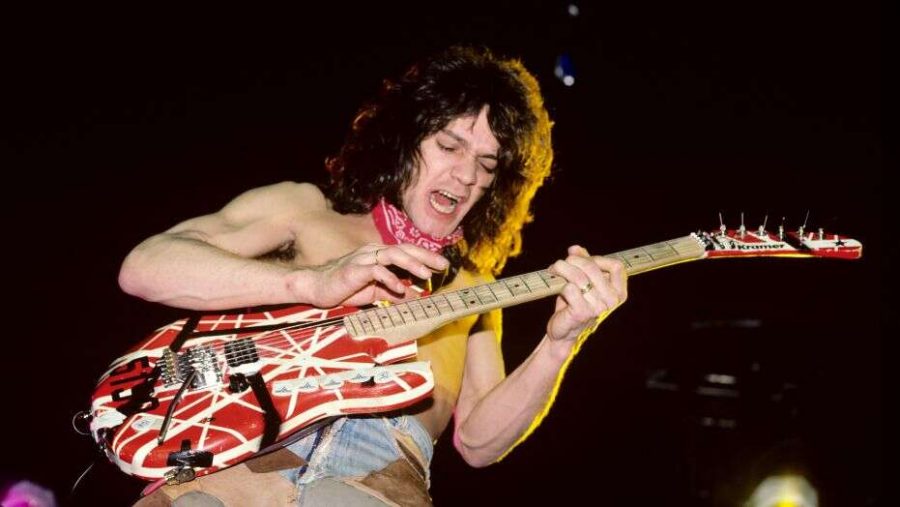 Eddie Van Halen, the lead guitarist, and songwriter of Van Halen has recently passed at only 65 years old on October 6th due to a tough battle with cancer. This deeply influential man gave Van Halen their name and sound. Will the music industry ever be the same?

Edward Lodewijk Van Halen was born on January 26, 1955, in Nijmegen, Netherlands. He and his family moved to California in the early ’60s. Eddie’s family consists of his mother Eugenia, his father Jan, and his brother Alex. While living in Pasadena, Eddie and Alex learned to play classical music on the piano. He and his brother both seemed to catch on quickly which really showcased his blooming musical talent. The idea of a career in music seemed to stem from the influence of the British Rock Invasion Movement. After the discovery of this musical movement, they swiftly chose different instruments. Alex took on the drums while Eddie undertook the guitar. They were very skilled at their individual tools, and since they had so many wonderful artists to look up to, they became very musically educated.

The Van Halen brothers partnered up to play with Mark Stone as the bassist creating the band Mammoth. Mammoth booked gigs anywhere they could in LA, from highschool parties to weddings and clubs. Kids from all neighborhoods came to catch the show. This helped spread their name and boost its popularity. Not long after this, they joined forces with singer David Lee Roth and bassist Michael Anthony. It was Dave Roth’s immediate suggestion to change the band’s name to Van Halen. They took this up not only because the name Mammoth was already in use, but also because they used Dave’s garage to have band practice. They thought it was only fair to let him help with the idea of the new name. During the time that Eddie trademarked the famous “two-handed tap”, the group signed a deal with Warner Bros. which lead to the debut of many award-winning albums.

In 1981, Edward married the TV actress Valerie Bertinelli. This soon became the talk in many tabloids, and in 1991 they had a son named Wolfgang. Sadly their marriage didn’t last and they split in 2001, having their divorce finalized in 2007. According to Valerie, their cause for divorce wasn’t just one singular reason. She admitted to cheating on him and that their unhealthy relationship with drugs wasn’t a way to start or continue a good marriage. After a good year or so Eddie was ready to start anew. During this time he found Janie Liszewski. Liszewski was a publicist in the adult entertainment industry. They had met when he offered her the job of being his publicist. While there isn’t much information about their marriage, Janie revealed that Van Halen proposed in 2008 in “a private room at Tiffany’s” while they were on vacation in Hawaii. Since then they were happily married for more than a decade.

As mentioned previously, Eddie had a strong drug addiction, but that wasn’t his only health issue. In fact, Eddie had battled with many other health problems. It all began with alcohol dependency. In short alcohol dependency is a chronic disease characterized by uncontrolled drinking and preoccupation with alcohol, which he profusely battled for a while, and successfully conquered it in the late ‘90s. Although, in the 2000s he was diagnosed with mouth cancer. Due to cancer, he had to get part of his tongue removed. This led the doctors to believe there wasn’t any more cancer spreading in him, albeit it only had subsided and continued to move down to his throat. In 2010 he was rediagnosed with throat cancer. Eddie received many regular treatments and continued to combat his cancer to the point where he could no longer continue.

Eddie received many awards and made many accomplishments all throughout his career. A couple of them being in 1983, Van Halen performed with his band on “Heavy Metal Day” at the US Festival in San Bernardino, California. They made $1.5 million for the 90-minute set. It also set a world record in the Guinness Book of World Records. Another accomplishment was the band’s debut album, Van Halen, which was a smash hit which included many of Van Halen’s signature songs like Runnin with the Devil, You Really Got Me, and the guitar solo Eruption. It was accredited Diamond in the U.S. and Multi-Platinum in Canada, and Eddie Van Halen won the American Music Award for Favorite Heavy Metal/Hard Rock Album in 1992 for the album For Unlawful Carnal Knowledge.

Darby Nicholson (10), mentions her current feelings about Eddie Van Halen saying, “The band has good songs and I enjoy listening to them. As for Eddie Van Halen, it’s sad that he died so young but I only really knew the connection between him and the band not as much about just him personally.” It’s clear to see that our generation only knows bits and pieces of him and the band, even so, it would be wise to educate children more.

Although Eddie lived a short life he lived a memorable one. On Facebook, Ted Nugent said: “Thank you Eddie for vitalizing, enriching, and stimulating our lives with your brilliance gifts and vision. Jam on my friend. Jam on,” and it couldn’t have been put any better. We will never forget the outstanding music he provided us with. May he rest in peace.