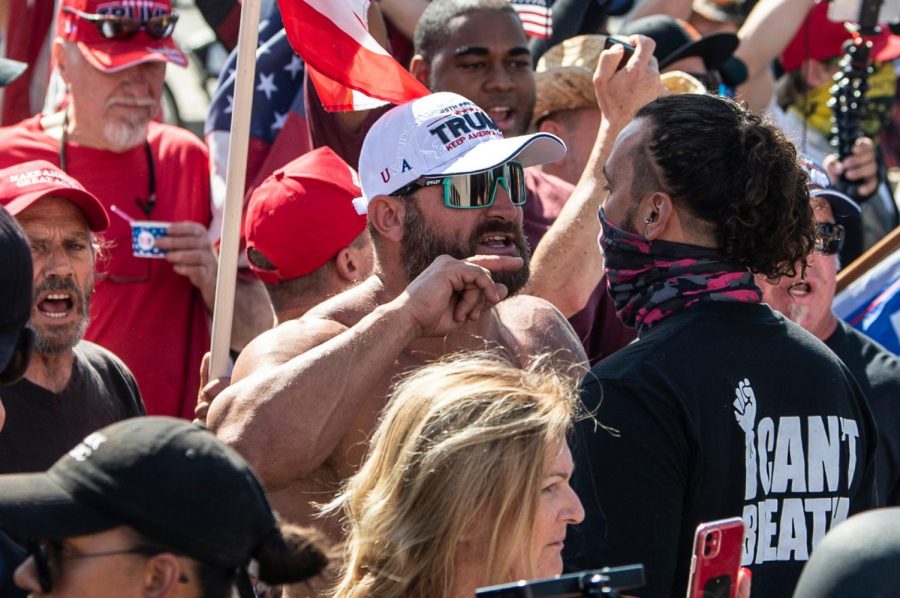 Black Lives Matter protester and counter-protester face to face in Yorba Linda as the two groups clash, ultimately resulting in a disorderly ending.

On September 26, 2020, a group of Black Lives Matters protesters gathered around the Yorba Linda Library and marched down Imperial Highway. However, they were soon met with counter-protesters with Trump 2020 banners, and American flags as they crossed the highway confronting the Black Lives Matters protesters. Soon, what was planned as a peaceful protest escalated to a chaotic ending that was reached on national news.

Tatiana Turner is an anti-racism organizer from Long Beach who planned for her group, the Urban Organizers Coalition, to have a peaceful protest at the Yorba Linda Library. The march began around 2 pm along Imperial Highway as protesters demanded justice for Breonna Taylor. A few days earlier, it was stated that the officers that shot and killed Breonna Taylor would not be faced with any charges for causing her death. This statement enraged numerous people that believed this was an unjust decision.

However, the counter-protesters were face to face with Black Lives Matter protesters when the counter-protesters crossed the highway. The two groups clashed with people chanting “Black lives matter” on one end and “USA” on the other, combined they created approximately 250 protesters total. With tensions rising, 200 officers rushed over to monitor the protests, and at 2:40 pm, the sheriff department ordered everyone to leave the area.

Shortly before 3 pm, Turner drove her car through a crowd of counter-protesters, running over one woman’s head and breaking the legs of a man, both of whom were Trump supporters. The victims are now hospitalized with severe injuries but are expected to survive. OC prosecutors accused Turner of driving into the crowd of Trump supporters on purpose. However, the defense responded that Turner was fearful as she saw people with guns and tried to get away with no intention of injuring anyone.

The protest organizer has been charged with attempted murder, and it has been unraveled that Turner has had a past of charges. Turner has numerous felony records relating to drug sales, domestic violence, and has six counts of assault with a deadly weapon. At the beginning of the protest, videos demonstrate Turner waving a baton and using pepper spray. It was reported that Turner pepper-sprayed two counter-protesters.

With the Black Lives Matter movement’s prevalence and the upcoming election, causing supporters to become incredibly passionate about their opinions, these two groups’ past confrontations do not have a peaceful record. As opinions from different perspectives never seem to reach a compromise, it destroys our nation, “Not only the political divide our country is facing, the racial divide is tearing our nation apart too. Violence is never the answer on both sides. In modern America, we must learn how to tolerate others and their ideas, not destroy them. I know that this new generation will right these wrongs,” Julian Lisboa (10) responds to the disunity of our nation. Currently, the world is experiencing a pandemic, the nation is facing a centrifugal political divide, and there is a movement pursuing the equality necessary for this country to fully reach its full potential. Therefore, now it is more important than ever for this country to unite and come together and tackle these issues as a whole.