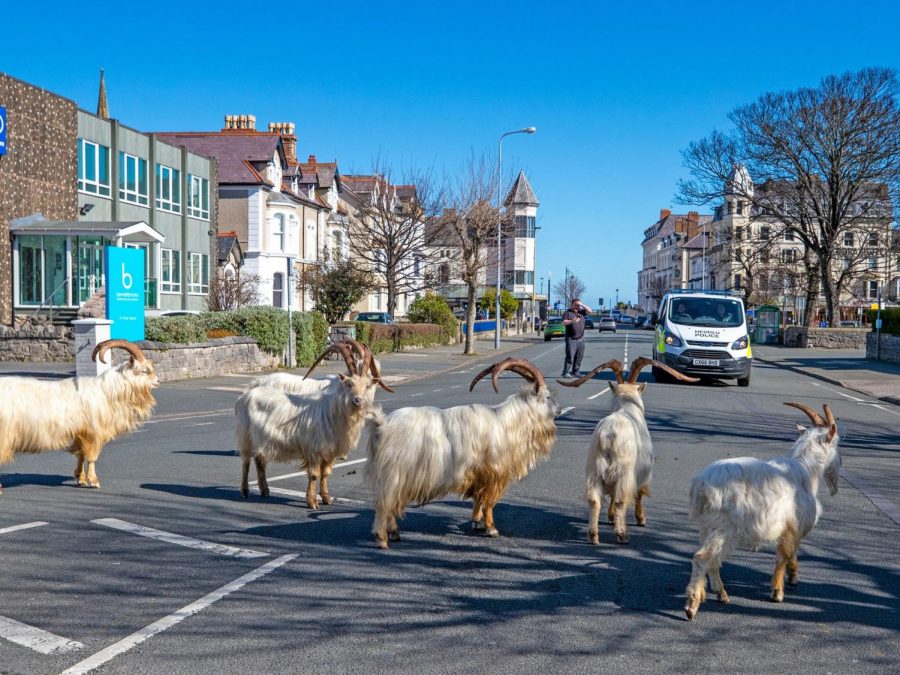 As the coronavirus forces individuals to stay at home, nature has taken over, including this sighting of goats in the streets of a town in Wales.

The COVID-19 pandemic has stopped the world in its tracks. Restaurants, stores, schools, movie theaters, churches, and amusement parks have dimmed their lights, waiting for the economy to reopen. Individuals have closed their doors, waiting for the opportunity to see their friends and family. As the economy sinks deeper into recession and society deeper into isolation, one aspect of the world remains the same, if not better–nature.

With cities on lockdown and stay-in-place orders issued, the bustle of human activity has greatly lessened. This includes traffic and transportation, and according to the Atlantic, satellites have detected a significant decrease in nitrogen dioxide emissions. As the first country affected by the coronavirus, China produced 200 million fewer metric tons of carbon dioxide–a 25% reduction in carbon emissions–due to reduced coal consumption, oil refining, and air traffic, according to Forbes. Less air pollution has allowed major cities, such as Los Angeles and New York City, to breathe free from smog for the first time in many years.

Water quality has additionally improved, as less boat usage has cleared the waters of canals and encouraged fish and other wildlife to repopulate the bodies of water. Since the demand for fish has decreased, experts expect aquatic life to increase in population, according to the Washington Post.

Wildlife has also emerged throughout now-deserted buildings and cities in unexpected and sometimes humorous ways. According to Business Insider, goats have roamed the streets of a Welsh town, turkeys have visited playgrounds in California, deer have explored Japanese subway stations, and wild boars have wandered the streets of Barcelona. Ducks have waddled into Paris, a peacock has visited Dubai, cows have taken over a beach in France, and a puma has even explored Santiago, Chile.

It seems that a reduction in human activity has caused a promotion of wildlife activity as the effects of modern human life greatly decrease in response to COVID-19. Without air and water pollution, the environment can heal; without the bustle of human life, wildlife can thrive. For Angelina Nguyen (12), the signs of nature’s recovery is “delightful. It really makes you realize how much humans harm the Earth.”

Despite these positive signs, however, experts warn that the effects of nature’s recovery will be short-lived. According to the Economist, when production accelerates as economies reopen and businesses rush to compensate for their losses, greenhouse gas emissions will return to normal and perhaps even higher levels.

While the permanency of the benefits to nature remains to be seen, one conclusion is certain–as humans social distance and stay at home, nature begins to thrive once more.