Stop The Hate!: Xenophobia at its Max 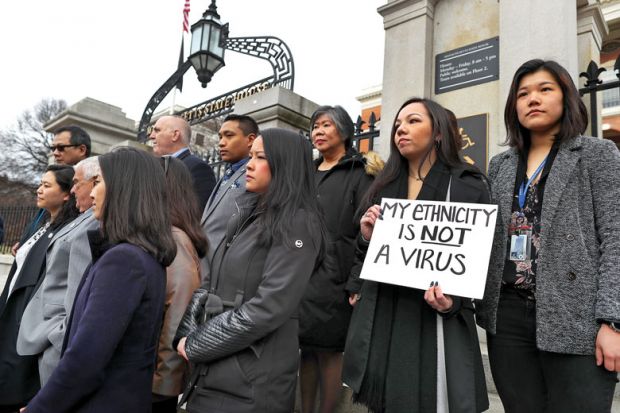 Photo Credit: timeshighereducation.com This here is people taking a stand against racism. Let’s not judge others based on their race.

With the fast spread of the coronavirus, many people cannot help but feel tired and upset over the situation. Moreover, with the virus coming from China, people cannot help but blame Chinese and Asian people in general. However, this does not justify the hate and the racism against Asians worldwide. This is a huge problem and must stop!

There is no problem with people taking precautions over the virus. For example, people have started to wear masks in public to slow the spread of the virus, and in doing so those who take these precautions should be praised rather than insulted. However, there are people making racist comments everywhere, from in the public to social media. Making racist comments is something that should not be justified. This is the less severe actions of how far xenophobia can go; some extreme cases include people physically assaulting innocent people.

One such case was a woman who was wearing a face mask and was assaulted by a man who loudly insulted her. There was a video filmed, and it showed him punching and kicking the woman (nbcnews). In general, it is not right for men to hit women, but to hit a woman out of racism, just because she was wearing a mask, is also not right! People have been targeted simply for being Asian and wearing a face mask. Although this happened in New York, there are cases that are more local. One case in LA surrounded a 16 year old who was assaulted and bullied at school. He was later taken to the emergency room as a result (losangeles.cbslocal). Even lethal weapons have been used, as an Asian family in Texas was assaulted with a knife, and the father and son were cut across their faces (cbs7).

People on Instagram have spread awareness to this problem by using #imnotavirus, where they wear a mask with words saying “I’m not a virus” and writing something that happened to them or they had witnessed. Although the virus is serious and dangerous, what is more dangerous about this virus is the poison known as racism. People cannot blame other people in a situation where everyone is susceptible to this virus. If people are only blaming other races, this will only cause more hatred, and it will not fix anything.

This situation has been making people scared of wearing masks due to fear of discrimination. It is important to remember that people cannot not justify racist actions or words by using the virus as an excuse. Sophie Zhang (10) said, “When met with threats, we try to look for a scapegoat to blame for what is going on. We should respect each other despite differences.” This situation is serious, as this may scar people emotionally. Please think about the damage of harming other people for no apparent reason.