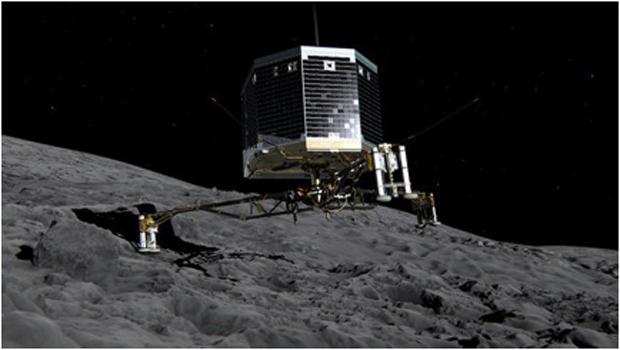 Photo courtesy of cbsnews.com An artist's interpretation of Philae as it lands on comet 67P

Humanity reached a new milestone in its quest for galactic exploration with the spacecraft Rosetta and the lander Philae on November 12. The Philae’s landing on comet 67P, also known as Churyumov-Gerasimenko, marks the first time a man-made object has landed on a comet. That’s a giant leap from one small step on the moon.

Rosetta and Philae’s journey has been 10 years in the making. After a delay in 2006 because of a rocket failure, Rosetta was eventually launched off-planet in March of 2004. After hurtling around Earth and Mars to pick up speed, it eventually shot into the black. On September 5, 2008, Rosetta flew by an asteroid, passing at 19,000 mph. In May 2014, Rosetta began slowing down to meet up with comet 67P.

After Rosetta began orbiting the comet, and before the washing-machine sized Philae could land, engineers found a potentially disastrous malfunction with the lander, Philae. A thruster on the back meant to keep it from bouncing off the surface wasn’t working. Although this may seem like a small problem, keep in mind that the comet’s escape velocity is only 1.1 mph. If you flipped a coin on 67P, you would never see it again.

Mission control was understandably tense as Philae descended towards the comet; after all, they had sunk a billion euros into the mission. As the footage of the landing streamed to screens around the world, lagging a half-hour behind the actual event because of the sheer distance between Earth and 67P, fear turned to joy as Philae came to rest on the comet’s surface. Still, the mission from there did not go perfectly; because the landing was softer than expected, the harpoons that were supposed to attach Philae to the comet never fired, and it bounced away to a position about a kilometer from where it was supposed to land. To make matters worse, it landed in shadow, so it can’t recharge its batteries using solar power. One foot of the lander is hanging in space, while the other two are planted firmly on the ground.

Still, “the great thing is that in the last couple hours of Philae’s having energy, [it] downloaded an enormous amount of stuff that’s going to keep the scientists busy for months and probably years,” says Astronomer Jonathan McDowell, from the Harvard-Smithsonian Center for Astrophysics. So even though Philae might be lights out, it didn’t make its phenomenal, solar-system wide journey in vain.