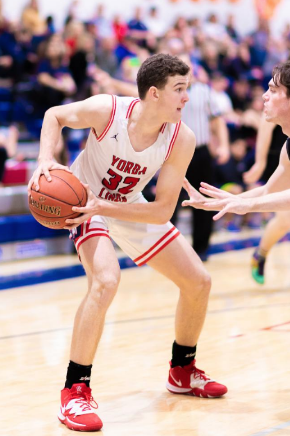 Alexander Davis shows off his shielding skills rehearsed during practice during one of the many intense games from CIF.

Basketball is a sport that is often idolized greatly among many across the globe. Names like Michael Jordan and LeBron James are just a few of the most influential basketball players that have truly paved the way for the game.

Here at Yorba Linda High School, we pride ourselves on the fact that we too have some of the most hard-working, dedicated athletes when it comes to basketball.

This 2020 season, it is safe to say the men’s basketball team truly dominated.

The boy’s started off the pre-season as they always do: with intense practice. Every weekday, for countless hours these boys put in the work needed to ensure a successful season. Coach Pietsch (Staff), a former basketball player and coach for over a decade, worked constantly with these boys.

Forming plays, repeating drills, intermittent sprints, Coach Pietsch poured hours of his time into the program in hopes of earning his team the league championship title, and he did. This year’s men’s basketball team was named the 2020 North Hills League Champions. With the obvious hard work this group of devoted athletes dedicated to the program, it was quite obvious they would come out of the league on top.

With being league champions comes competing in California Interscholastic Federation, or commonly known as CIF. Qualifying for CIF is an accomplishment in itself, as teams from high schools across California compete for the title: CIF champions.

Coming off of being league champions, YLHS men’s basketball was determined to compete against some of the most prestigious athletes within the state.

Round one of CIF was highly anticipated, as the boys would be playing an opposing team filled with talent: Rialto High School. The home game was intense, to say the least. Aggression and competitiveness filled the gym as the score fluctuated throughout the game. Lay-ups and three-pointers were constant, and the passion for the game was obvious between both teams, but ultimately, YLHS took the victory with a close score of 58-52.

The next round was an away game, feeding the boys nerves even more. Now YLHS would face another gruesome opponent: Heritage High School. Away games are always unpredictable, as the environment is completely unfamiliar, so the need for a perfect performance amongst the team was imperative. Once again, the game was close. Both teams were driven to lead victorious. With hours of practice dedicated to this one game, each team did not want to end their seasons. Both teams showcased immense talent, but YLHS came out on top with a score of 58-45.

Home once again, CIF round three was talked about all throughout the YLHS campus. Students attending the game were instructed to wear red to show off their school spirit. YLHS attendee Madison Miller (12), “could not believe how many of [her] peers were at the game.” The YLHS student section was drenched in red, and the opposing high school, Fountain Valley, was dressed in their school color, blue. The game was fast-paced and the scoreboard was constantly changing. Both teams experienced the lead, but YLHS fell short towards the end, losing 61-50.

Overall, this season was a total success for YLHS men’s basketball. Not only did they grow as athletes, perfecting their skill sets and form, but they also grew as individuals. These boys were nothing but hardworking, driven, and passionate, all of which are attributes of a true Mustang.