What’s Wrong with Your Skin? 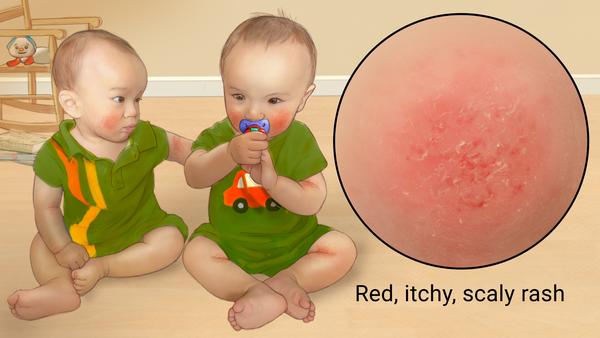 An image of babies dealing with atopic dermatitis, a condition that has a reported 3 million cases each year.

“What’s wrong with your arms?” she asks, her eyes meeting mine with a look of confusion and slight disgust. I feel my face begin to warm, my embarrassment causing me to tug at my sleeves vigorously, hoping to hide the red splotches that reign over the surface of my arms. While her inquiry may have been intended to be nothing more than an innocuous question, my own insecurity results in me interpreting her observation as one based in revulsion and criticism.

My skin has always been a major player in the hatred I feel for my body. Eczema has persisted in my life since birth, fluctuating in terms of its severity from month to month. I’ve been prescribed every possible cream and ointment in the book, yet the ugly skin condition that remains present on my body remains irrepressible.

A scientific link has been discovered that connects atopic dermatitis with not only the dry weather, but stress as well. Stress hormone, cortisol, is released under intense situations and can suppress the immune system, leading to the flare up inflammation in the skin.

According to Neosporin, approximately 35 million Americans- 1-3% of adults and 10-20% of children- are affected by the chronic problem. It is a prominent issue, one that can result in sleep disturbance and a higher risk of prolonged diseases, as described by the National Eczema Association.

While I once believed that my inflammation, dryness, and itchiness was something that I alone experienced, I’ve increasingly discovered its presence in many classmates that I meet. Around half of individuals that suffer from eczema find embarrassment as a result of the condition and thus will occasionally avoid social interaction.

Eczema is a condition that may seem minor regarding its effect on one’s health, but it is the way in which it affects our self-confidence that remains one of the worst symptoms. While it is unknown the specific correlation between eczema and mental illness, the National Eczema Association revealed that over 30% of atopic dermatitis patients reported to suffer from depression and/or anxiety. The reasoning behind this correlation is unclear, but it is evident that sufferers of the skin condition can be more susceptible to problems regarding their mental health.

In the same way that acne is the central root of many teens’ insecurity, eczema is also a central contributor to shame and discomfort. Yet it is important to note, that in the same way adolescents complain about their raging acne, it is possible to share experiences and feelings with a large number of individuals dealing with the same uncomfortable and embarrassing symptoms. Personally, knowing that one of my best friends, Jacob Viveros (12), also suffered from the same problem, and experienced the “immense discomfort and disgust” regarding his body, helped me feel more accepting regarding the state of my body. By communicating and connecting about something that may be deemed shameful can help deal with some of the intense insecurity that a skin condition can cause.

Eczema and other noticeable skin conditions are just additional points of insecurity in teens already fragile self-perceptions. Understanding to not feel embarrassed nor shame others for the visible blemishes in their skin is an important contributor to building self-confidence rather than tearing it down.