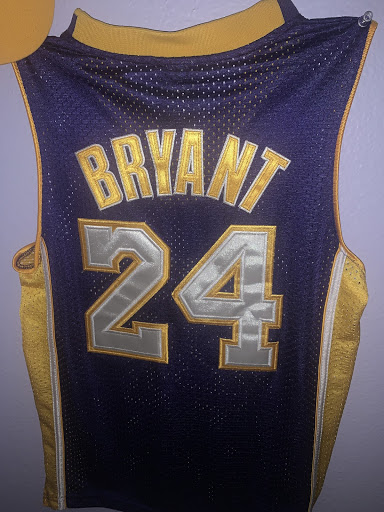 Kobe Bryant’s jersey hanging as a symbol of remembrance of his life and basketball career.

NBA superstar Kobe Bryant, his daughter, and the Altobellis family tragically passed away in a fatal helicopter crash on January 26th, 2020.

Unexpectedly, the world was deprived of the 9 beautiful souls on the helicopter who were simply going to a daily basketball practice at the Mamba Sports Academy in Thousand Oaks.

Fans across the country paid tribute, posting on their social medias and sending letters. Danielle Huizar (10) writes about how her and her friends were affected by this loss when she says, “My entire instagram page and snapchat stories were Kobe Bryant posts and I could really tell everyone was shocked.” Fans continued to show their love by additionally building a shrine of flowers outside Staples Center in Los Angeles, where he originally became a star. The paraphernalia started the day of the crash only hours after the news.

The most common thing was a simple basketball that represented the sport that Kobe loved and made a career out of. Some consisted of messages to Kobe and his daughter that wrote about the inspiration that Kobe provided and the unfortunate manner of Gianna’s early death.

Another item that has symbolized Kobe’s legacy are his two jerseys, etched with the numbers 8 and 24.

The number 8 is the number he played with during the entirety of his career, up until 2006 when he changed his number to 24. Fans brought their jerseys to the front and center of the stadium and mixed them within the shrine of remembrance.

Some other items in the memorial were custom balloons, stuffed toys, bobble heads, and small Bryant knick-knacks that people had collected the years of his growth.

Staples Center officials knew that those items could not stay there forever and began to clean up around 4 A.M. the next week and fenced the exterior to shield from public view. It had been recorded that 1,353 basketballs were collected, all dedicated to those lost in the crash (Twitter).

Officials informed the public that some of the items will be given to Bryant’s wife, Vanessa Bryant. She made a statement on her Instagram saying “My girls and I want to thank the millions of people who’ve supported and loved during this horrific time.” She had requested items, which were to be cataloged and shipped to the family. Flowers will be composted and spread around plants near Staples Center.

Fans were urged to donate to a Bryant foundation rather than bring more gifts and flowers. The Kobe and Vanessa Bryant Family Foundation is a foundation that provides scholarships and opportunities to kids to become better athletes, leaders, and independent thinkers.

The nation united together in disbelief and grief of this loss, which you can see through the memorial outside the Staples Center.