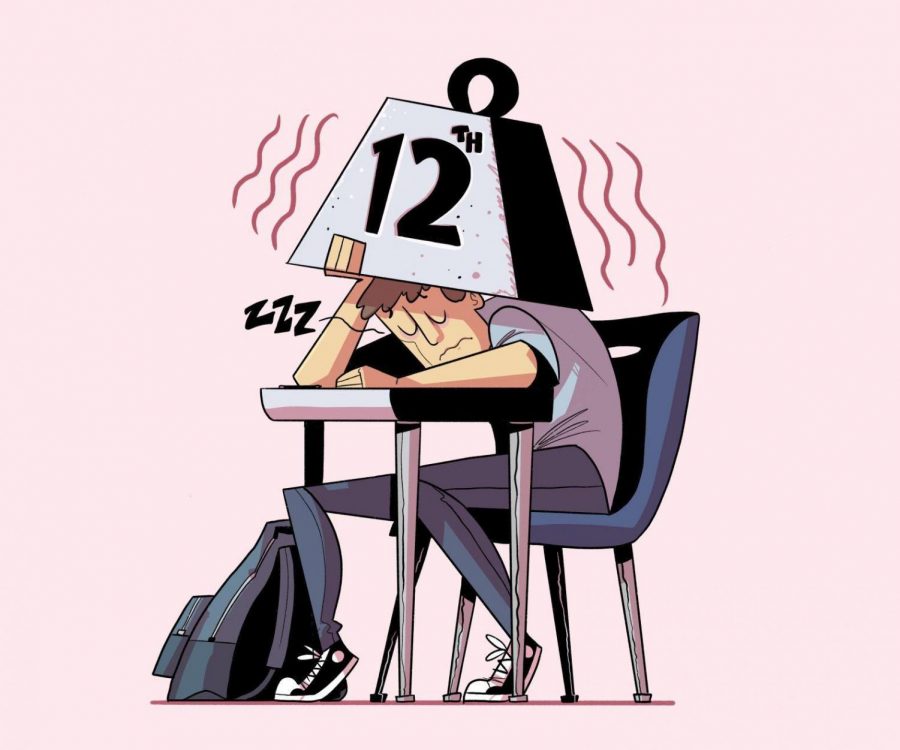 Senior year, I have learned, is not the easygoing year it is often made out to be.

The first class I took in high school was College and Career Preparation the summer before my freshman year. In addition to the critical lessons of planning ahead and translating my interests into a major, the course dedicated nearly an entire chapter to a topic which could be summarized by a single order: avoid senioritis like the plague.

Senioritis is the infection teachers dread, parents fear, and senior students in high school inevitably catch. It is the de-motivating force which keeps students from attending to their responsibilities and finishing their final year of high school with the same energy and enthusiasm they held throughout the last four years. It is the nightmare of College and Career Preparation courses; it is the factor which threatens the work ethic students have devoted years to building; it is the lethargic sentiment I struggled to fight against as I worked toward some of the most important steps of my life during my senior year.

I always envisioned seniors who were infected with “senioritis” as lazy, sluggish students who decided to quit everything they had worked toward in their final moments. As a senior myself, one of the first lessons from my last year of high school is that this is far from the case.

Senioritis is not laziness; it is best characterized as burn-out in the worst way possible, not only because it is difficult to fight off, but more so because it arrives at the most inconvenient time. After more than twelve years of school, and especially after the overwhelming exorbitance that was junior year, I felt–simply put–tired. I was tired of nightly reading, weekly essays, and frequent projects; worse, I even grew weary of club meetings and extracurricular activities which I have taken part in during the last four years. After three years of investing my best efforts and all of my energy into every homework assignment, test, and club, I struggled to garner the motivation to contribute one more year.

This lethargy could not have come at a worse time. My first semester of senior year was dominated by a single, looming presence: college applications. Three years of hard work and dedication culminated into a few 350-word essays, and despite years and years of writing hundreds of essays, I found myself struggling to write the ones which mattered the most.

Completing my college applications was one of the most exhausting and daunting tasks I have faced, which, in all honesty, makes me slightly embarrassed to admit because they are so critical and common. I hated talking about myself in the seemingly endless amount of essays, and I constantly doubted whether my writing, SAT scores, GPA, grades, and extracurriculars/awards would be enough for admission. Before I had even applied, I feared rejection; I couldn’t even finalize the list of colleges I wanted to apply to.

I prioritized college applications over my school-related responsibilities, but as I also pushed off my applications, I began to suffer under the sheer weight of my to-do list, which grew every day due to no fault but my own negligence. To my unpleasant surprise, I endured more late nights than I ever had within the past three years, even including junior year. I felt stressed and overwhelmed, but on top of it all I felt frustrated and upset–after years of consistent and demanding hard work, had I not earned myself just a year off?

Needless to say, senior year is not the easygoing, laidback year I envisioned it to be. Before the year started, I looked forward to one less class per day, spending more time with my friends, and a brief 30 minutes of freedom with our off-campus lunch passes. While my senior year has fulfilled these expectations, it has also included college applications, demanding classes, and responsibilities which, in all actuality, may have not changed in terms of amount but may appear to have amplified in my senioritis-infected eyes. Along with many other seniors, Sarah Kim (12) also shares this frustration: “I thought senior year was supposed to be a relief, but it has turned out to be one of the most demanding years of high school so far.”

As I complete my first semester of senior year and my second-to-last semester of high school, I continue to grapple with these challenges but have come to realize the finality of it all. My struggle to finish homework seems trivial, almost meaningless, in comparison to the real challenge which lies ahead of me in only a few months: bearing comfort and familiarity goodbye as I enter the next stage of my life.

With a newfound appreciation for routine and a renewed enthusiasm for my last moments in high school, I enter my second–and last–semester.