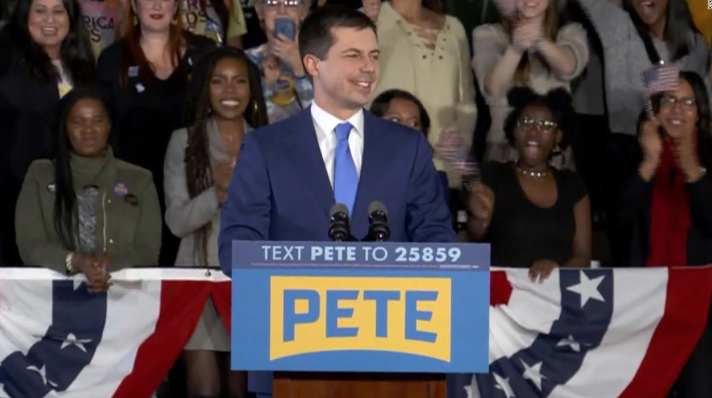 Pete Buttigieg, surrounded by devoted supporters, speaks on his placement of the Iowa caucus.

As 2020 kicks off and Election Day nears, conversations seem to be solely about the Democratic candidates. Especially after the recent impeachment of current president Donald Trump, new and experienced voters across the nations have kept an eye on each candidate’s statistics and promises in hopes of finding an individual suited for their wants.

This past Wednesday, February 5, the Iowa caucus took place.

The Iowa caucuses are electoral events for members of both Democratic and Republican parties held in Iowa which take place every other year. They are typically held in informal settings, such as fire stations or schools.

This event acts as the first major contest of the US primary presidential season.

While they may not represent the rest of the country, the caucuses give an accurate depiction of how candidates will perform in later contests.

Pete Buttigieg and Bernie Sanders seem to be in a close competition, as Buttigieg had 26.2% of State Delegate Equivalents, while Sanders had 26.1%.

Elizabeth Warren came in third with 18.2%, Joe Biden was fourth with 15.8%, and Amy Klobuchar was fifth with 12.2%. Andrew Yang, a popular candidate among the younger voters, only had about 1% of SDE’s (CBS News).

These numbers may seem insignificant, but they play a significant role for the future of these democratic candidates. As Biden still leads in the field in national surveys and has outperformed his competitors in Trump matchups, it begs the question as to why Buttigieg performed so well in this competition.

Buttigieg did well in almost every demographic.

For caucus-goers holding a college degree, he earned the first choice, while those without a degree made him their second choice.

In every aspect, Buttigieg was either the favorite or the second favorite candidate, making his placement in this contest valid (Slate).

As for the future for the Democratic party in this upcoming election, it appears as though Buttigieg has earned himself an upper hand amongst his candidates. His performance has sparked talk amongst citizens all across the country, especially at Yorba Linda High School.

Students who can vote in the upcoming election continue to watch the polls, determining which individual suits their ideals. As a soon-to-be voter herself, Shayda Roshdieh (11) explained that she, “can’t wait to voice [her] vote for the first time.”

There are still many competitions in the future and months away till the November election, but one thing is for sure, these candidates will stop at nothing to earn the title President of the United States.