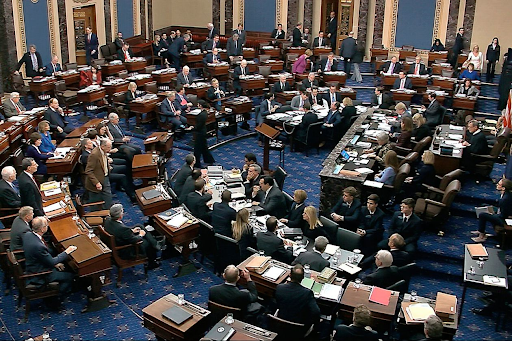 Senators cast their votes on allowing additional evidence and testimonies into the impeachment trial of Mr. Donald J. Trump.

December 18 of 2019 marks the day of the impeachment inquiry of sitting President Donald Trump. However, his trial within the Senate continues on in an effort by opponents to see him removed completely from office. On Wednesday, the senators will vote on whether or not to evict Mr. Trump from the Oval Office, but for now, here’s a recap and update of the impeachment trial.

Towards the end of last year, the Democrat-dominated House of Representatives passed the two articles of impeachment, or the two allegations against President Trump. The first allegation is most famously that of Mr. Trump’s dealings with Ukraine. According to bbc.com, the president is alleged to have withheld millions of dollars of military aid and a White House meeting with the Ukrainian president in exchange for the Ukrainian government’s aid against Joe Biden, a Democratic presidential candidate in the race for the elections in November. For the Democrats, this was an abuse of power by Mr. Trump for his own benefit, which is an impeachable offense.

In the second allegation, according to The Washington Post, Democrats accused Mr. Trump of hindering Congressional investigations into the alleged affair with Ukraine. Mr. Trump had blocked his advisors from testifying in the investigations with Ukraine, and is now being accused of obstruction of Congress.

With the articles of impeachment having passed the House of Representatives, the President is now officially “impeached,” being the third in American history to have been so after previous presidents Andrew Johnson and Bill Clinton. However, he has yet to be removed from office entirely. This removal from office takes place in the Senate, the upper level of Congress, where two senators from each state – 100 senators in total – will vote on whether or not to oust Mr. Trump from office.

However, Mr. Trump’s removal from office is very unlikely. In order to remove him from office, ⅔ of Senate must vote to convict, and if that ⅔ threshold is not met, he remains in office. While the overwhelming majority of the Democrats in the Senate are likely to vote to oust the president, Democrats constitute only 45 of the 100 members. There are 2 Independents within the Senate who may swing their convictions in favor of the Democrats, but they would only garner, at most, 47 against the 53 Republicans in the Senate.

On the Republican side, many have voiced their position of standing firm with Mr. Trump. 38 Republicans have voiced before the trial that Mr. Trump should not be removed from office, and if these 38 maintain their position when voting, that leaves only 62 votes against him, a sum insufficient to give him the boot.

Despite all the speculation, the case is still not over. Wency Li (10) encourages students to stay caught up on the news of the impeachment trial, expressing that “no matter what happens, the final decision will definitely be important for everyone.” On Wednesday, February 5th, we will receive the final verdict of the trial and the fate of our 45th president.