Alert! The Coronavirus is Here! 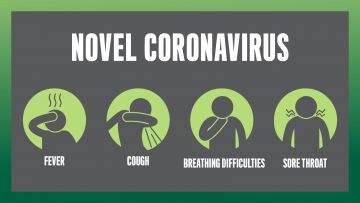 As the coronavirus is spreading, be careful and watch out for these symptoms as well!

The Coronavirus, which began in December of last year, is now in Orange County. Although it may seem unbelievable that the virus is actually in Orange County, it is here and is real.

The Coronavirus originated from Wuhan when there were reports of a virus that had pneumonia-like symptoms. At first, the researchers thought that the virus was from a snake, but a research team at Wuhan Institute for Virology suggests that the virus actually came from bats. The researchers suspect that the virus came from an animal that was carrying it and was being sold at a seafood market (Fox News). Not only that, the virus has many similarities with the SARS virus. The SARS virus also originated in China in the same way in which the Coronavirus began. Both viruses are contagious, spreading from human interaction or sneezing and coughing. Make sure to cover your mouth when sneezing or coughing because the virus spreads through the saliva that is coming out from the mouth (aljazeera). Currently, there is no cure; although some people have recovered from the virus, the death toll and the amount of people affected is much more.

Currently, there are 20,627 cases that are confirmed globally and 427 deaths confirmed globally as well. In mainland China, there are 20,438 confirmed cases and 425 deaths (CNN). Combined, that is over 40,000 cases confirmed and at least 800 deaths and there are definitely many more unconfirmed cases. There were travel bans implemented but it was too late as it had already spread to other countries like Australia, Germany, South Korea, Japan, the U.S., and more. The main reason as to why the virus was spreading is because Chinese New Year was on January 25. People from Wuhan came to meet family members in a different country or people were traveling to Wuhan on a vacation or to also meet family, and that is how it eventually came here to Orange County.

A man who was traveling to Wuhan came back to Orange County and had gone to go see a doctor when he started to not feel well. He was tested positive for the virus and was immediately put into isolation (CNN). Although everyone thought that it would be safe, there was already another case confirmed in Chicago when a woman in her 60’s went to travel to Wuhan, another in Washington when a man also went to Wuhan and came back, and more (CNN). The U.S. also put up some travel bans on travelers who have been to Wuhan (CNN).

The virus is still ongoing, and even though it may feel like it will never get us, it is still roaming around and is still dangerous. Jacqueline Jung (10) said, “I do not really think it is a big deal, but people should be careful. Do not think that just because the death rate is low that the virus will not cause damage, and do not think that it mainly affects younger and older people because everyone’s immune system is all different.” Be careful and make sure to wash your hands and avoid any close contact.