Sympathy vs. Empathy: What’s the Difference? 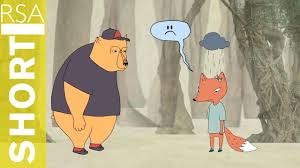 In this video by Brene Brown, we get to see the vast differences between sympathy and empathy portrayed through animals, creatures often viewed as loyal and compassionate in society by their devotion to each other and humans.

Sympathy and empathy, two very powerful emotions possessed by humans, are often used together to show how we care for others. Both have the Greek word pathos, which means suffering and feelings. Although they share many similarities, when the words are further scrutinized, one can see the inherent differences between the two.

When a person is sympathetic, it shows that they care about the situation in which someone is struggling with. The person can show this through pity and sorrow, and they demonstrate only a general understanding of how the person feels. Other times, sympathy may manifest through generosity, where someone will give the person something to distract themselves from the situation. This offering the person gives them may satisfy the other for a portion of time, but it will never solve the issue.

One problem with being sympathetic is that people will often add a silver lining to the person’s distress, using words such as “but” or “at least” (6seconds). When people say this, they are trying to make the victim seem optimistic, and that there could be worse things that could happen. However, this can drive people away, as the struggle they are dealing with is still present. The person helping may also unintentionally offend the person needing help, making them sound as if they are ungrateful and should not feel the way they feel.

When a person is empathetic, they feel the suffering of the other person, and can relate to them. The person assisting will help guide them in the right direction through advice and their past experiences that they have faced. Giving them past situations may make the person feel as if they can relate to others, and additional hope that others have been able to get through what they are facing. Often, people become more empathetic as they mature. For example, a child may not feel empathetic towards their parents until they are older, when they then realize how their parents have devoted their time in raising the kid to be a great person.

Simply put, it is if a person is stepping in the shoes of another person. If someone is having a bad day or doesn’t understand something right away, one should not judge them for their flaws. Instead, one should analyze why they feel that way. Perhaps someone had put them down with harsh words, or maybe they are just having a rough day. After all, there has been a time where other people may have been this way too.

Empathy can forge connections with others, since we get to hear the other person’s story, intently listening to every detail. Hearing this intricate story is an important part of empathy, and allows people to figure out the root causes of a problem that they would never consider. Sharing information with someone has shown to make people feel better, since their feelings aren’t concealed anymore.

Sharing your own personal experiences with the person in need can also be very beneficial, as they will begin to realize they are not alone. Ashlyn Davis (9) expands on this idea, stating that “It helps people learn from each other, knowing they can understand and feel the same pain as the other person.”

In the end, both of these traits are very important in society. Sympathy can bring encouraging words to others, while empathy can bring peace in times of distress. Overall, it is amazing to see how two similar words can be so different.