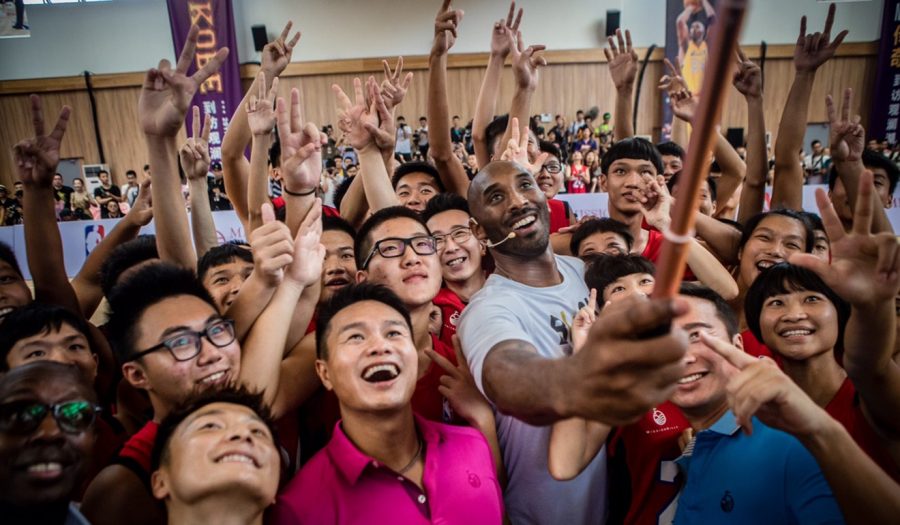 Kobe takes a picture with some of his youth fans during the grand opening of his new “basketball school” in Haikou, China, during 2017.

Former NBA and Los Angeles Lakers legend Kobe Bryant tragically passed away in a helicopter crash last week at the young age of 41, alongside his 13 year-old daughter Gianna and seven others, with no survivors onboard. The shocking crash caused communities all over southern California and the world to gather and mourn in a way never seen before. Just outside of Staples Center, where the Los Angeles Lakers play their home basketball games, thousands of Bryant fans laid flowers on the ground and wrote messages about how much he meant to them. Thousands more would continue to visit his fan-made memorial in Downtown L.A. all week long.

The reasoning for why Kobe was so popular and beloved not just in California, but around the globe, of course has a lot to do with his play on the court. Bryant won five championships, an MVP award in 2008, and is regarded by most sports analysts and fans as a top five basketball player of all-time. But it was Kobe’s work off the court that really made him well-known and idolized around the city of Los Angeles and the planet.

The country of China specifically was just as enamored with Bryant as the city of Los Angeles was. Basketball first started to gain a large following in China when Yao Ming, the first Chinese NBA player ever was drafted by the Houston Rockets in 2002. While watching the games to see Ming play, the new Chinese fans began to see just how great of a player Bryant was, and fell in love with his style of play.

Kobe would end up becoming just as popular as Ming among Chinese sports fans. He made visits to the country every year, hosted certain fan events sponsored by Nike, and held numerous basketball clinics for the youth to help teach them basketball skills. Bryant even established the Kobe Bryant China Fund in 2009, which was backed by the Chinese government to help put millions towards educational and sports programs for the poor.

Perhaps one of the biggest things Bryant did in the country was partnering with NBA China to construct a “basketball school” in Haikou. Opened just this past year, the “basketball school” is meant to help young and professional players help learn things that are NBA-level to help improve their talents. NBA-level coaching is present at the school, as well as an NBA “interactive experience” and store.

Bryant was of course idolized in southern California by so many residents. Like in China, he held basketball camps yearly during the off-season in Los Angeles, in which kids from around the globe attended. He partnered with Los Angeles based organizations Step Up on Second and My Friend’s Place to help fight the city’s homeless crisis. Kobe was also the honorary chair of the 5K run/walk titled United Way of Greater Los Angeles, which was also created to help fight homelessness in Los Angeles.

Bryant was one of the most loved people in the history of the city of Los Angeles, as shown by the thousands of residents that gathered at his memorial outside Staples Center. But he wasn’t just loved by a city; he was loved by a planet. Michael Monroe (12) said about Kobe, “Everyone who knew who Kobe was admired him not just because of his amazing play, but because of his friendly interactions with his fans, especially his younger fans.” While Kobe will always be remembered for his legendary fadeaway jump shot and his five championships, he will more importantly be thought of as an athlete that brought so many communities around the world together.