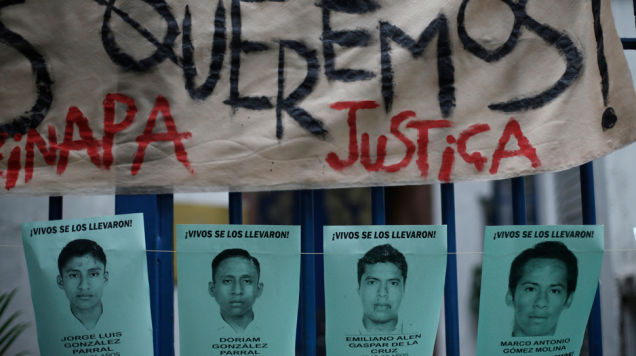 Photo courtesy of gawker.com Some of the victims of the killing

The role of democracy is to provide for the people. The role of the police is to protect the people. So what does it mean if the police arrest 43 student teachers and give them to a local cartel to kill them, all under the order of the mayor and his wife, who have had long standing ties to said cartel?

Although this sounds like a bad movie plot, it’s all true. This tragedy occurred in the city of Iguala on September 26. Students from a small teachers college with radical views in the nearby town of Guerrero hijacked four buses in order to get to a protest. The then current mayor, Jose Luis Abarca, feared they were going to interrupt a speech from his wife, Maria de los Angeles Pineda, who aspired to become the next mayor after her husband stepped down. Abarca ordered the police to detain the students, which was done with the deaths of six, three students and three bystanders. The remaining 43 students were taken to the nearby city of Cocula, and, sometime later, were placed on a dump truck and taken to a location at the outskirts of Iguala, where mass graves have been found.

But that’s not the worst. The remains found in the mass graves didn’t belong to the students. Those bodies were believed to have been the result of disappearances in August. According to confessions from suspects, the students were killed and burned for over 24 hours, during which numerous methods were used to keep the fire going, including gasoline and tires. Afterwards, the remains were placed in garbage bags and dumped in nearby river. Although many charred human remains have indeed been found in a nearby river, the identities of those they belong to have not yet been identified.
The mayor and his wife disappeared shortly after the students’ disappearance was noted. They were eventually found hiding out in an abandoned house in a slum, trying to avoid police. The former mayor, Jose Luis Abarca, swears that on the day of the incident, he was dining out and that he had told the police not to bother the students. Both Jose and his wife have had long standing ties to the Guerreros Unidos, the drug gang responsible for the tragedy.

Although the 43 students are not the first to disappear in the war on drugs in Mexico, their case has been the most notable. The fact they the victims were so young and had no ties to gangs emphasizes the horror of what happened. “The disappearance of the students has detonated all the accumulated pain of the thousands of disappeared people in this country,” said Camila Bernal, a 19-year-old Chilean who is a communications student at Mexico’s National Autonomous University.