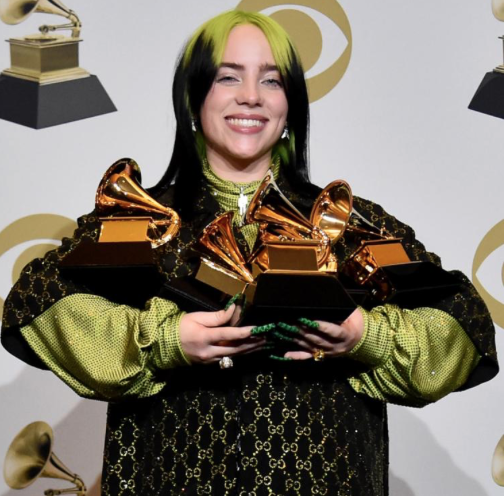 Billie Eilish can not help but smile as she shows off her five Grammys.

The famous golden gramophone which envelops every artist’s dreams seems almost impossible to earn. With the overwhelming influx of new talents every year, the chances of being deemed a Grammy-award-winning artist are low.

Every year as the new year kicks off, the Recording Academy holds a recognition ceremony for prominent artists in the music industry. During this yearly event, there is always one individual who wins numerous awards, this year’s deserving artist being eighteen year old superstar Billie Eilish.

This year’s Grammys, being the sixty-second, Billie Eilish went home with five awards: Record of the Year, Album of the Year, Song of the Year, Best New Artist, and Best Pop Vocal Album. She won five of the six categories she was nominated for, falling short to “Truth Hurts” by Lizzo in the Best Pop Solo Performance category.

In earning these Grammy’s, Eilish broke numerous age-related records in the process. She became the second person in Grammy history since Christopher Cross back in 1981, and first woman, to win the “big four” awards. Currently, she holds the youngest Album of the Year winner, beating out Taylor Swift by two years.

She is now the youngest record of the year winner in Grammy history.

Not only did Billie make the Eilish family proud with her album When We All Fall Asleep, Where Do We Go?, but so did her brother Finneas O’Connell.

The night was not just acceptance speeches for Eilish, as she performed in front of an array of talented artists, as well as the millions of viewers watching from home. Dressed in her typical oversized designer set, accompanied by Finneas, Eilish performed her slow song When the Party’s Over.

Not only was Eilish’s music a hit, but so were her outfits. Being known for wearing baggy, yet bold attire, most were anticipating quite the outfit. Her looks did not disappoint.

The red carpet was the talk of the night, as she wore an oversized, black with green accents, Gucci set. Paired with the set were matching gloves and a mask to really tie the look together. Her dark hair with green roots also pulled the look together. A major conversation piece of the night about Eilish were her over-the-top nails. The two-inch long nails detailed with the famous GG Gucci imblum caught the eyes of many as she strutted down the carpet.

As Eilish’s career continues to flourish, it is safe to say she has made quite a name for herself, in both music and fashion. Her fans can not seem to get enough of her, including Savannah Pietsch (12) who claims she’s one of her “favorite artists.”

So as the years go on and more music is produced, one thing is for sure: this will not be the last of Eilish’s Grammy appearances.