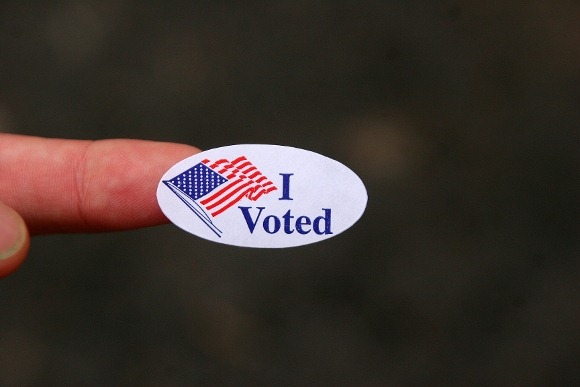 The image captures an “I Voted” sticker given to Americans who vote.

Some may say that Election Day is especially important and should be given more time and value. Others say that it is not a big deal and should not be given as much importance. With so many people choosing not to vote on election day, would considering making it a national holiday be a good idea?

According to the United States Elections Project, more than sixty percent of Americans do not vote on election day. Whether it is a matter of simply being too busy to go to vote or not giving much importance to it, Democrats want to make it a national holiday to encourage more people to vote on Election Day.

One side of this debate supports making it a holiday by saying that giving a day off to people will encourage them to vote because there is more attention drawn to the matter. However, holidays like Veterans Day, Independence Day, and Labor Day still aren’t given much importance even though they are established National Holidays. The real meaning of those holidays have been almost forgotten. Making Election Day a National Holiday would most likely have little impact and wouldn’t be effective in raising awareness in the future.

According to procon.org, a disadvantage of making Election Day a National Holiday is that low income and blue-collar workers will be left out because the law does not require private employers to give workers paid federal holidays. The new Election Day Holiday would make more high-income workers vote while low-income workers are not as encouraged to vote. This would inevitably lead to an uneven representation of low and high-income workers.

Another perspective is against making it a holiday because grade school students will also have a day off, but will not use the day for anything special. As students get days off from school during most holidays, Election Day does not provide anything to the students apart from missing a day of school, since they cannot vote.

However, Ameerah Hirji (10) has an interesting suggestion for making it a National Holiday when she states, “It could be a minimum day for schools. By letting students go home early, they could observe and see how the process works. This would help educate students on voting and why it matters to the country. It is a very important day in the year that could be beneficial to helping students understand the government.” Not only will a minimum day further students’ knowledge about the government, but they will also apply this knowledge to voting in the future which may possibly increase the number of people who vote.

Also, voting is not a very long process. Therefore it does not seem necessary to give Americans a full day off. On the other hand, schedules of different people will vary and allowing a full day off will allow people to make time for voting wherever it may fit into their schedules.

Altogether, there are pros and cons of making Election Day a National Holiday. Depending on which side of the debate one may support, various opinions will arise.