To See Sky: The Central Lesson of Dear Evan Hansen 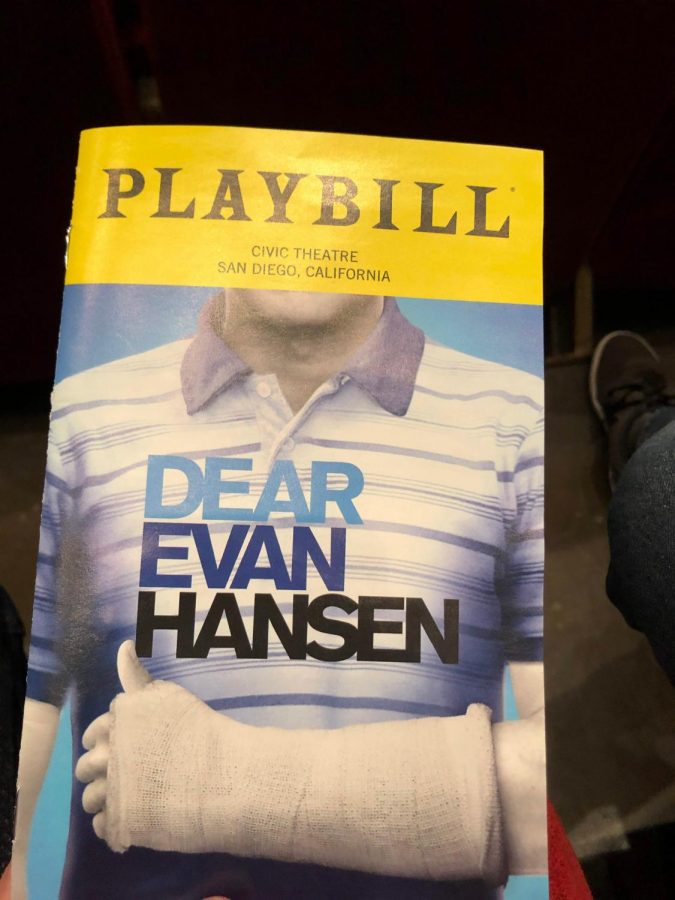 The Playbill of Dear Evan Hansen where I saw it. Even the outfit depicted on the Playbill carries heavy symbolism which becomes evident after seeing the musical.

Examining topics ranging from life with social anxiety to the consequences of deception, Dear Evan Hansen is a Tony-Award winning, contemporary musical that explores teenage life in an age with access to worlds of information and communication via technology and social media.  Ironically, for all the communicative power granted by modern technological innovation, this world remains unfamiliar to the titular protagonist, Evan Hansen.

Evan Hansen is a senior in high school with a severe aversion to social interaction. Nearly everything, from ordering food for himself to simply going to school, becomes a challenge for him due to this aversion. In the beginning, there are only three people who he can actually communicate with: his overwhelmed yet doting mother, Heidi Hansen, an overly-cheerful acquaintance, Alana Beck, and a contemptible family friend, Jared Kleinman.

In order to overcome this aspect of himself, his therapist assigns him to write motivational letters to himself; however, Evan’s world completely changes when one such letter falls into the wrong hands: the hands of Connor Murphy, an abrasive and emotionally unstable young man who commits suicide as a result.  This triggers a chain of events that pulls Evan deeper and deeper into a web of lies, for his ineptitude in social interaction renders him incapable of escaping. He lies to benefit both himself and the grieving Murphy family, simultaneously concealing the ugly truth from both those he helps and hurting those close to him, including his mother and his two closest acquaintances.

In this manner, he becomes a facsimile of Connor Murphy, emotionally abrasive and distant to others. Soon after, Evan proceeds to emotionally harm everyone around him, even his family and himself.  He confesses his lies to the family, losing both their trust and appreciation in the process. Ultimately, he is able to rise up again as a new person, still socially awkward, but more capable than he was in the beginning.

Overall, Dear Evan Hansen is a powerful musical that takes viewers on an emotional rollercoaster with its soundtrack and character interactions, even though the characters may seem unsympathetic at some points. Regardless, the show offers valuable lessons to viewers, one in particular that is seen in the mannerisms of Evan Hansen.

Such a heinous person offers no lessons to the common person, right? After all, a lying, manipulative fraud serves as a rather poor role model. Jade Low (12) agrees, adding that “Evan is essentially the person that many people realize they could potentially be: socially disconnected from the world, afraid, and unsure of how to connect.”

True, Evan is no better than the average person.  He has his own flaws, and the fact that he intentionally lies to both benefit himself and to conceal an ugly truth from another family cannot be overlooked. Rather, it is how Evan changes from the beginning to the end that he educates the audience.

He learns to accept himself.

By the end of the musical, he learns to be comfortable as the person that he is. While he is still socially awkward, he is no longer the socially-inept boy that he was in the beginning, nor is he the abrasive döppelganger that hurt so many people.  He’s a new person who has harmed and been harmed, forgiven by some, yet not by all. Despite this, he still has the strength to continue forward, even when his strength faltered in the past.

Self-acceptance is the most important lesson that Dear Evan Hansen has to offer.  After all, once we learn to step into the sun, we know that today is going to be a good day. And here’s why:

Because today, at least you’re you. And that’s enough.