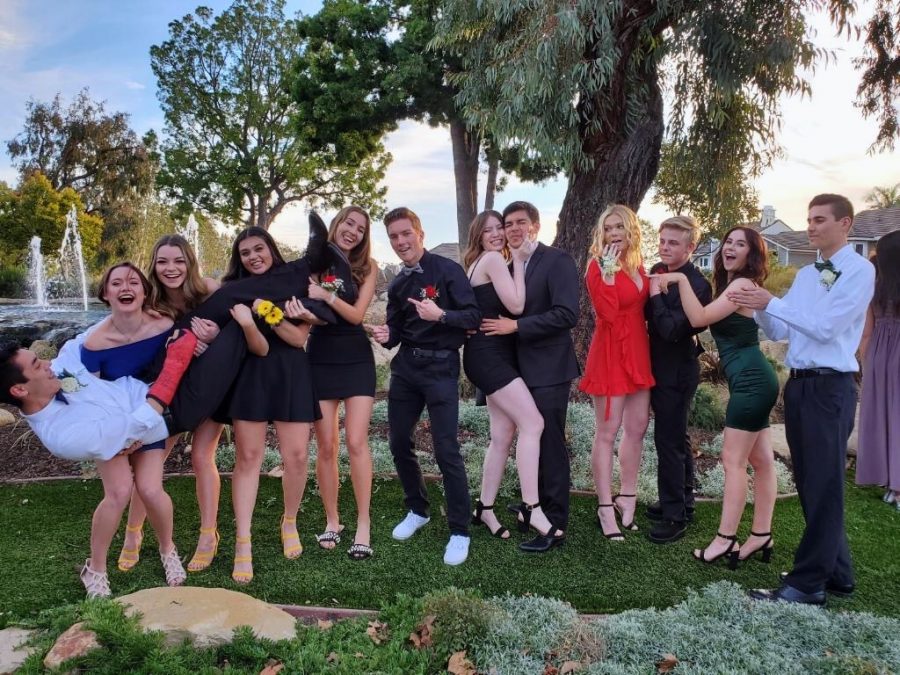 This is a picture of a group of seniors before they attended the dance some from different schools other than Yorba Linda. From here, they went to the venue and had an amazing night dancing at the Discovery Science Center.

For the final weekend to finish off the first semester of school for the Placentia-Yorba Linda Unified School District (PYLUSD), all schools within the district had gotten together for the first ever “District Dance” that the schools had put on. Usually around this time of year each school would have a separate Winter Formal dance to which guest passes would have to be exchanged and venues would have to be booked out at different times on different nights to insure no clashing of one another. To lessen the complications of such an event, the ASB teachers and classes had taken it upon themselves to organize a unified dance to appease the masses. Yet, though it lessened the complications, did it also sustain the enjoyment of the night?

Having the dance at the Discovery Science Center was not only a unique and interesting touch to the dance, but it also left the students who attended with more scope for the imagination. Immediately upon walking in, the guests were greeted with a live jazz band to set the fun and lively mood for the night. The students had an instant feeling of fun and movement with every step.

The two levels led hand to many amazing rooms such as a karaoke room as well as the massive dance floor itself that had music playing nonstop. The venue the schools had chosen was a stand out success. From the rooms, to the dance floor, to the jazz band, and everything in between. It had left the guests desiring another hour of fun once the night came to a close. In fact, Ashley Payne (12) states, “I liked it because there was so much to do and it had me leaving wishing there was more time to explore”.

Not to mention the music. The djs had given so much life to the dance floor to the point where no person was standing still. In a dark room with lights high on the ceiling, all of different colors, shining on the stage, kids cheered and moved with their friends. The entire crowd  had been so excited that if one were to stand still on the floor while everyone else had kept moving, the floor itself could be felt bouncing beneath their feet.

Speaking of so, the amount of students who had actually attended was also a major factor in the success or downfall of the dance itself. Luckily, many many students had decided to show up to the amazing event, yet that left issues that had to be taken care of. Food, water, dance space, and the venue as a whole needed to accommodate for five schools all in the same building. Still, the intelligent ASB classes had thought all of those situations through.

For the size of the guests attending, having a two story venue with several different and interesting rooms was perfect. Not only would no students be crammed, but they would never be bored as a result of the various situations each room would hold. The snacks and water had been located right outside the dance floor in such a place that no students had run into them or felt crowded by them, but rather they were a helpful way to energize for the next hour or so. Students had the opportunity to see their long time friends in a way that they had not been able to since as far back as middle school and all these background details had simply made it go just that much smoother.

The dance itself had been a success. Not only did it sustain the enjoyment of the past dances, but it actually increased it ten fold. Friends had reconnected after years of going to different schools over music they had not heard for years as well. All this done on a dance floor full of life felt the second they had walked into the venue. Students are already excited about the possibilities of next year’s dance, hoping to capture the same memorable moments with their friends, as they had this year.