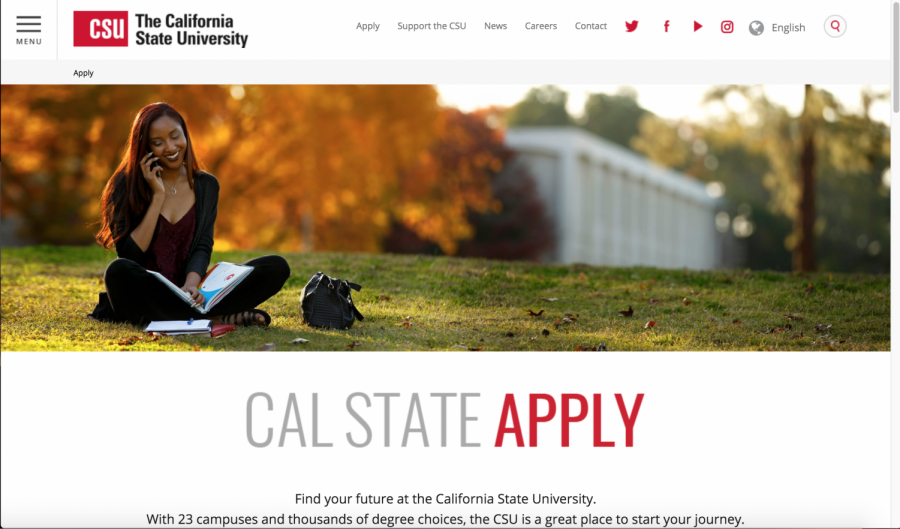 This is the picture of the Cal State website that you see when you apply to its colleges.

With college applications finally sent for many students who are applying to them, most people assume that the stress of the everyday applicant is gone. That cannot be farther from the truth. With the fear of college rejection and, even worse, the wait time to get the letter that determines a person’s future, the stress is even greater than before.

Constantly students are thinking about what they could have done better throughout their application. The fear is much greater with the application not being able to be altered. Many people do notice the college process as a whole is a much greater issue than students first believe.

Though, students are warned about this time and time again. The payments, the work, and time management are all major factors in what truly makes college a stressful environment for new students. However, none really prepare themselves for the aftermath of the application.

Once they are sent, students feel this entire new sensation of fear and stress that revolves around the idea of failure of not having done enough. When all the information is laid out on the table and the application is submitted, the students not only feel less than, but also are hit with the realization that their future is no longer up to them.

This is when they begin to wait. The waiting process can take upwards to weeks for many of those in the process. As Ashley Payne (12) believes after having completed her applications, “This is a big issue amongst students and the college system.” They are constantly being pinned against one another, then held to a standard they must wait to hear if they’ve achieved or not.

As a whole, colleges must begin to understand the true stress of the average student not only before, but also after the application process. Some ways to keep a cool head as a student would be to simply realize that all that could have been done has been done. Rather than dwelling on whether or not the students would be accepted, they should instead focus on the classes they are taking at the time because the truly hard part is over.

Students as a whole should be much more acceptable of themselves and the work they’ve done throughout their high school careers as well as their applications themselves. Though it may seem as though they could have done so much more than they give themselves credit for.