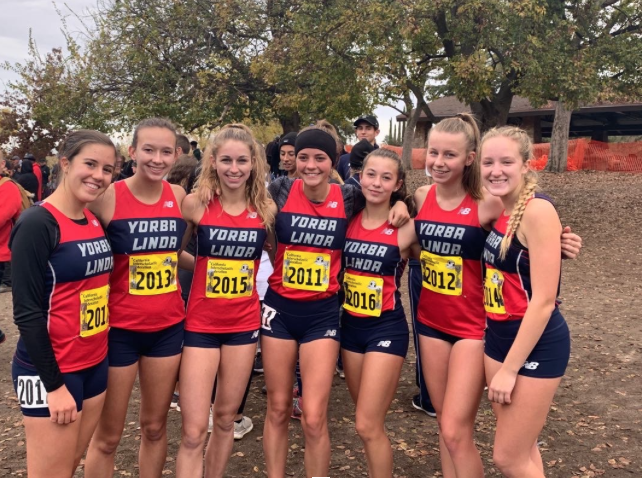 Siena Palicke (11) along with her peers are filled with excitement before they take the grass to compete at state.

As the winter weather takes charge and the talk of finals fill classrooms, students begin putting in maximum effort. Review packets make their way to desks and Quizlets used for brushing up on old terms appear on every laptop. Most students begin working their hardest, while others only have to skim a few pages in their notebooks to be final-ready. Siena Palicke (11) has been consistently hard at work in all aspects of her life since August 27, the first day of school. Whether it be in the classroom where she can be seen with her hand in the air waiting to answer her teacher’s question, or out on the grass running past her many competitors, Siena is always giving her all.

With a schedule loaded with strenuous classes such as AP Spanish, AP Lang, Ap Calculus AB, and AP Biology to name a few, she obviously takes her education very seriously. Not only does she take some of the most difficult classes offered at Yorba Linda High School, she is also extremely involved in various clubs. NHS, CSF, and Red Cross are some of the many clubs she devotes her free time to. Also, she is the vice president of the youth ministry club. She has even been named a scholar-athlete and received the academic mustang achievement award for her outstanding academic performance throughout her high school years.

Though some may find students with such reputable academic stature intimidating, Mackenzie Clifton (11), describes Siena as “a kind and welcoming friend.” Together with her outgoing personality and bubbly humor, it is impossible to not enjoy time spent with her. Siena also is extremely supportive. Her caring, loving nature makes her the best friend to go to during a time of distress. Whether you are in need of a good laugh, or a warm hug, Siena will always have your back.

Siena has truly made a name for herself on campus at YLHS, especially when it comes to her performance in cross country. Her statistics leave most students and faculty in shock including her fellow cross country mate, Brandon Vega (11) who says she “is one of the fastest runners [he’s] ever seen.” Accompanied by her entire lady cross country teammates, Siena competed against some of the best runners in the state. Together with her years of training and instruction from YLHS coaches, she placed fourth at state. She is also a member of the track team here at YLHS and is the current record-breaker of numerous races such as the eight hundred sprint, mile, and three-mile category. Also, she holds the mile record in the Crestview league with an incredible time of 4:54.

As the month’s progress and tests pour on, one thing is for sure, Siena will not be caught slacking. With her admirable work ethic, both in her education and sports, she continues to prove herself to be one of the top students attending YLHS. Whether she pursues a career involving education or follows her obvious passion for running, it is clear that Siena is destined for a future with great success.